Just an update... I live in Omaha, Nebraska. I'm ok, but all around me is not.

Fremont, Nebraska has no direct route in or out. Some have had to evacuate their home. Many of the people that live there work in Omaha. I work with someone that lives in Fremont. His wife was stuck in Omaha, while he was in Fremont. She did make it home by driving on a street that was closed soon after she drove on it. They've had to work together to make sandbags. Many took each other in. Fremont has never had a flood problem like this, so many didn't have flood insurance.

HyVee (a grocery store) drove 5 huge trucks of food on back roads to Fremont to donate food. Good things do happen in bad situations.


Waterloo and anyone by the Platte River is also under water.

This street is supposed to keep going:


It happened so fast! That's why people didn't get out. We had a ton of snow on the ground still, so with getting a ton of rain, there wasn't anywhere for the rain to go.

When the rescue missions were occurring families had to leave live stock behind. Horses can swim, but they are finding some animals dead.

Shelters have actually not been used a lot. They attribute that to good friends and family that have taken them in.

We have not been out to see any damage. They said for people to stay away, so workers can do what they can. Plus it's just dangerous.

Here's all the roads that are closed: 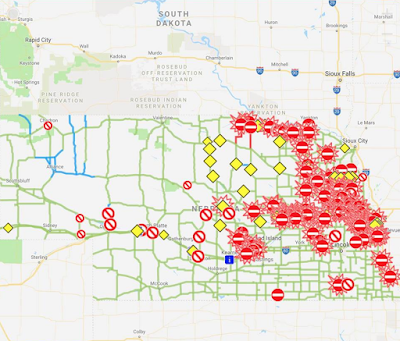 It would be hard to travel just about anywhere in Nebraska and Iowa right now. Anywhere there was a river or creek there's flooding that happened.

We did drop off a ton of water at a shelter spot. One area has contaminated water, and others that don't have a home needs many things.

I worry about the people, their homes, them having to rebuild, livestock gone, and food prices going way up from farmers not having a farm.

We're safe and sound being in the middle of Omaha.
Posted by An Apel a Day at 11:11 PM

Those images are heartbreaking. I hope those affected will be able to recover quickly. I think when things get bad though, it's truly amazing to see how people flock to help. Despite what the news says, disasters show that there are still people with compassion for their fellow man.

I remember when Albany was flooded in 1994... we took blankets and board games to donate.... it was horrible... then of course we have had the other 2 floods.. but
Not like 94. Been meaning to check on you... glad to hear yall are okay.