Isaak played soccer in the spring, and now in the fall. He really is enjoying soccer. His coach really lets him work the field.

They had a double game last week. They won their first game, played hard on the second, but didn't win.

Isaak has a whole drawer full of workout clothes. What does he wear?
The same thing every time. 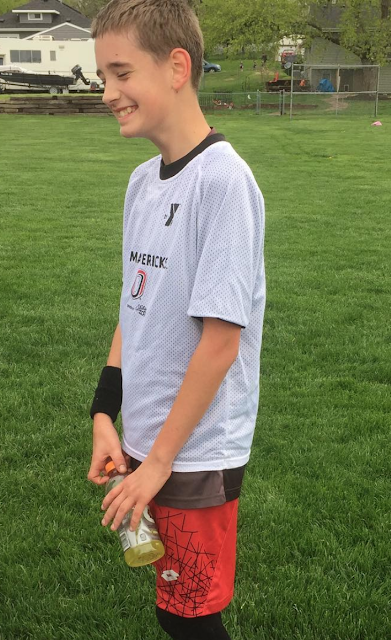 The best thing...kids are nice on his team!

The basketball team he was on was just not his fit. It has been that way, for awhile. He loves the sport, but not the team he was on. There was a kid that wouldn't give the other team high fives when they lost, he'd slam the floor when he the other team was making free throws, he'd push up against players, and more. Things like that just make Isaak pissed, and nothing was being done about it.

We found out when Isaak played at school, he was one of the top players. As opposed to his select team he wasn't even passed the ball. He doesn't need that negativity in his life.

He's not the BEST player at either soccer or basketball, but he's a good asset to both sports.

We signed him up, for basketball at the Y next to keep his skills in check.

At school he has intramural sports. Right now it's volleyball. Isaak and his carpool didn't really have the interest. When basketball starts they plan to play.

Travis makes Mica go to all Isaak's games. I don't even know why. Mica sits there and reads or listens to the music. He never knows the score. Travis says he has to go to be supportive. He's not supportive at all. Just like Isaak's not supportive to Mica's Quiz Bowl. He has no interest in that either.

Last week I was tickling Mica, and Mica was poking me in the arm. Being on Aspirin, all those pokes turn into bruises.

Travis said, "Let's trade spots. I'm getting sick of you two." We traded.

Then the two boys battled with empty Gatorade bottles. Mica's chair was knocked to the ground. Travis wonders why our "cheap" chairs break. Humm...I wonder. 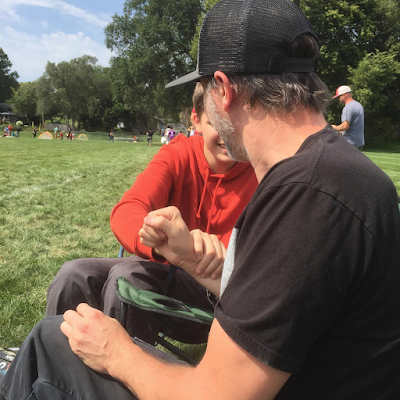 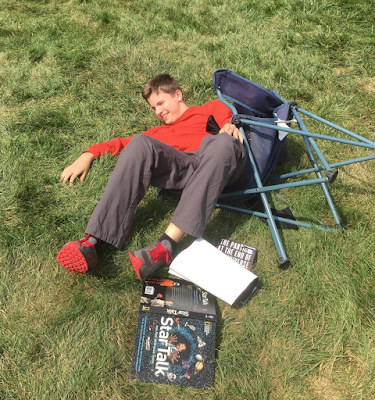 When you were a kid, did you go to your bother or sister's sporting events, concerts and so on for support?
Posted by An Apel a Day at 3:26 PM

There was a 10 yr gap between my brother and i... so when he was in sports was my teen years... yes, I went to golf tournaments when I was older :)

I'm with Travis on the support of a sibling. I always made Allison go to Mariah's events and when Allison was old enough, Mariah had to go to hers. Now that Mariah is in college, they don't get to attend everything the other does, but in the long run, I think it did make them realize the importance of keeping track of what their sibling is doing. Mariah will send Allison a text and wish her luck on a play or have fun at the dance when she can't make it in person, and Allison in turn sends texts to Mariah wishing her luck on upcoming tests or congratulations when she gets a promotion at work or an award at school. They are more in touch with each other these days than they are with us. We usually hear what one sibling is up to from the other LOL. I'm glad they are close, and I do think making them support each other when they were younger did play a role in how they are acting towards each other as young adults.

I used to go to all my brothers' baseball games but I think it was more because I wanted the concessions than being supportive. Ha!