I've been on crazy mode trying to get things done. I have all my holiday decor up, all my cookies made (which is a lot!), presents wrapped for my nephews, and gifts bought for my children. I've been pushing Mica to nail out his Science Fair Project. Mica has been stubborn about that one. I just NEED to work on my holiday card in a big way.

I've been freaking out about Monday (Possible Jury Duty), for a good month. I just feared trying to find parking downtown. Crazy that I grew up here, and feared that. Maybe it's all the one way streets. I found out my Mom is the same way. Maybe I get it from her.

Travis was hoping I'd get Jury Duty. He wanted me to wear my big girl panties, and get my ass downtown. Well I called Sunday night, listened to the Juror numbers 3 times, and swore mine didn't need to show. Travis said, "Umm yes you need to show." Not only was I direction incompetent, but I was dyslexic with my numbers too. Nothing new there. Maybe directions and numbers go hand in hand.

Just so everyone knows, I tested positive for a learning disability in college. I never had a name attached to that disability. I've always found my way, somehow. Anxiety does happen from time to time, when things are weak in my mind. I get through.

Off I went downtown. Get this...it's mostly straight, but it feels like I turn and twist all over the place because the streets merge into other streets. Much of the way wasn't narrow straight, but I only turned twice and once was right by my house.

I never got lost, and parking wasn't so bad. 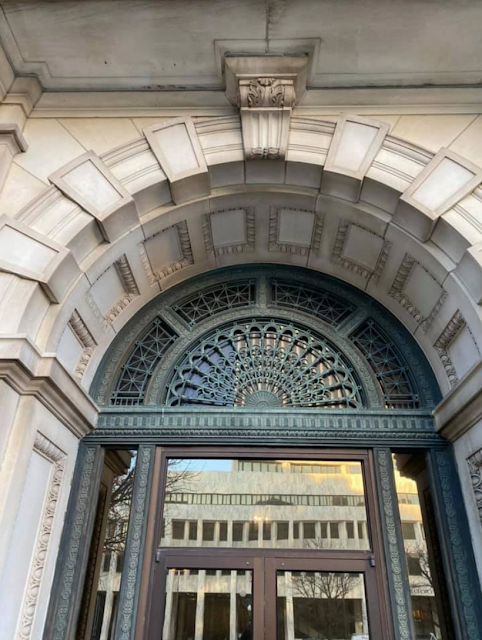 I pay attention to everything!

Except when it comes to directions.

When I got there I had to go to the bathroom, so bad. I drink like crazy in the morning. Guess what? A couple was getting married in the hallway, right in front of the bathrooms. Who gets married at 8 in the morning right by the courthouse bathrooms?

I was one of the first to check in. No one sat by each other, but the room was full of people. It was so odd. You could hear a pen drop in there.

They told us on our forms to dress business casual, but there were lots of people in ball caps and t shirts.

One guy showed up with 2 very small children.

There were 2 trials going on. They only needed 12 x 2 = 24 Jurors. There was well over 200 people there. Everyone was divided into 2 groups. Then between the 2 groups the selection process began.

We entered the court room. Again I pay attention to everything. A guy was told to take his hat off. Two girls were not. Odd!

I'm thinking, There's a lot of people, maybe I won't get picked! They called off, "Alesa Apell", which I knew meant "Alissa Apel" rhymes with Melissa Maple.

18 people were called up.

They kicked off 6. 2 were nurses. The case involved nurses. 1 was a lawyer that defended cases like that. 1 worked for a law firm. 1 just had a surgery, and couldn't sit still. 1 was just trying to make his way back into the world after being homeless. I stayed.

Every time I was in the courtroom I thought about one of the Jurors getting the hiccups up there. Not able to control themselves.

We were told to listen to the facts, not to talk to each other about the case, not to talk to outside sources about the case, and not to have empathy for each party. The empathy part was the hardest. Second hardest was I didn't know how much we could or couldn't talk to the other jurors. Apparently they didn't know either. The room typically got very quiet on our breaks. So much so, that the water bubbler was extremely loud when someone was getting a drink. You could hear when someone was peeing. When we had to buzz in that we were all there, ready to go back in after a break I swear it felt like we waited an eternity for them to show us into the courtroom. It felt like we were inside an escape room, and may not find our way out.
Posted by An Apel a Day at 9:42 PM

I can't believe someone showed up with kids! Actually, I can, but still...

I've been called but haven't sat on a jury. My mom did once and was made the lead juror on a murder trial. Yikes!

I know it's my "civic duty" but I do not want to do jury duty, ever. I have an autoimmune disorder and would worry that I would get sick and need the restroom in the middle of the trial and not be able to leave. (my disease comes on fast and is very unpredictable). I usually tell them that if they defendant made it all the way to the courthouse, then in my mind, they are guilty anyway. It's always gotten me booted off the list. That's probably why people brought kids. To make it look like they don't have child care so they could get out of it.

I've never been selected and I'm glad. Though it would be a good way to legally get out of work scot-free. :) Glad parking was not so bad and you didn't get lost.

Eek, I feel for ya! Hope I never get pulled to do jury duty. Hopefully the fact that I work for 9-1-1 would keep me from doing it. I'm pretty bad with directions that I'm not used to, so I completely understand your anxiety there.

I couldn't do it.... I just get too emotional