I learned what a Staycation was from the blog, What I Did Today. We wanted to go on a vacation. Ideally we would have picked Colorado, but were willing to stay closer and go to South Dakota. With all the flooding going on outside of Omaha, Nebraska and the recent status of our nephew Emerson; we decided to stay home and go on a Staycation.

We got a hotel, and did things that we normally wouldn't do. 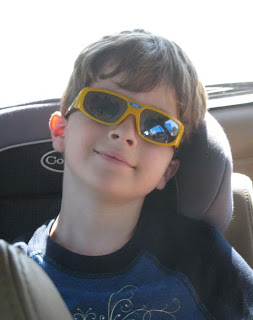 We spent a good two days at Mahoney State Park. I will blog with pictures about all the things to do there later. Only I have been there.

The kids rode pony's for the first time. I felt very comfortable about it because the horses were tied up and they just went in a circle.

We spent 3 hours at their water park. I really did not get pictures of our water park experience because I wanted our camera locked up. It didn't top our Great Wolf Lodge experience in Kansas City last year, but certainly was fun! One thing Mahoney State Park water park had that the Great Wolf Loge didn't was a wave pool. Mica tried attacking the waves with karate chops! LOL Then we climbed a huge tower. That I do have pictures of. The boy's climbed it twice. I had Crocs on and it hurt my feet; I only climbed it once.

We went back home to eat left overs. Then got a hotel. If we were thinking ahead, we would have scheduled to get a cabin at Mahoney State Park. We didn't want to mess with a tent because this year there are lots of bugs with all the flooding water.

The next day we went hiking at Mahoney State Park. I have lots of pictures of us hiking. I was so impressed with Isaak! He hiked with us without complaining too much about walking. Mica of course was ahead almost the whole time. We then went to the paddle boat area. A 1/2 hour of that was fun! We went to the Henry Doorly Zoo Safari. We've been to Omaha's main attraction Henry Doorly Zoo many times, but only Daddy's been to the Safari part. We like the actual zoo better. We went back to Mahoney State Park, so the kids could play on their playground and we visited their playground.

In the evenings it was cable TV. We don't have cable TV, so it's staycay for us! We watch Three Men and a Baby. Both boy's liked it. Then the next night it was the newest Indiana Jones. The boy's stayed up later then I! We swam in the hotel and they had a kick butt continental breakfast!

We went to dinner at The Cracker Barrel the second night. Mica loved their little store just as much as I did!

Day three we fit in sleeping in, watching more TV, Cabela's, The Brass Armadillo Antique Mall, we went home for a very needed nap and watched a movie called Rango. Rango wasn't rated the highest, but we liked it! I think it wasn't rated the best because it had a lot of adult humor. Johnny Depp was the main star, so it was sort of twisted/artsy like many of the movies he's in are.

Day four is relaxing at home. I did most of the laundry yesterday late afternoon and before bed. We may go someplace later. We're sort of winging it.

I asked Daddy if he felt like he was on vacation? His answer, "Yes!" I was glad about that. He was the one at first was the most disappointed in the idea of staying here. He loved Mahoney State Park! The boy's liked everything! I liked not having to drive, drive, drive.
Posted by An Apel a Day at 11:01 AM

That is so much fun! It is exciting just to get out of the house and you don't have to pay for all the gas to get somewhere! It's amazing how much there is to do close to home if you look for it. Or in our case, there is tons to do and we just don't always make time for it. I'm glad you all had a fun staycation!

How fun! I think a staycation is such a good idea, especially when trying to save money. I just have to convince my husband it can be fun :)