Yesterday I Signed a Baby's Cast

It's been awhile since I've seen any of Aunt Terra's family. We went to KC one weekend, then they were sick and then Isaak was sick. I stayed away on purpose just because I didn't want sickness to be passed back and forth. Isaak could of had what their family had. Sickness is a vicious cycle! I hate finding out that my family was responsible for getting other people sick. It happens though.

Cousin Emerson got a cast on his leg to fix his club foot. His foot got nicknamed, "Magic Foot." The cast did go up a little higher then they thought it would. I imagine that it's harder to cast a baby's foot. No bones were broken. They just massage his little foot and cast it. They were hoping for a yellow cast, but had to go with white.

I love seeing all the signatures on his  cast! Some of them are kid signatures. I helped Isaak sign his name. 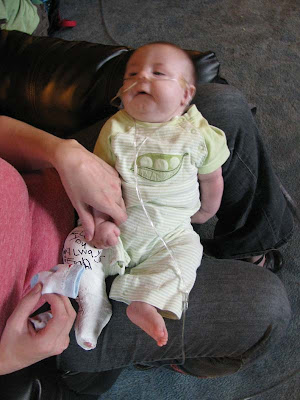 They are trying to work on getting him to take a bottle. He needs to exercise his throat muscles. He did a little tiny bit today. It's a start. He's trying to suck his fingers. In this case it would be great if he did. Aunt Terra's finger could use a rest. :)
Posted by An Apel a Day at 3:48 PM

Awwww... how cute!!. It does make me sad that someone this young has to go through all this.

He's such a precious little guy! Keep fighting and getting stronger, little one.

i thought of yall the other day...
went through a town and noticed it was called emerson :)

He looks great there. Here's hoping he continues to suck that bottle! He sure is a fighter, hugs to all of you.