It started with pizza in the gym. I chopped up celery and clementines to take with. Then they had salad to boot. It was mostly iceberg lettuce. I've gotten in the habit of taking extra veggies and fruit when we go to school events and sometimes even out to eat. Isaak ate all his pizza, which he usually doesn't.

Everyone working at the event had a number on their shirt. If Mica asked them what their number meant, he got both an explanation of the number and a slip of paper. He then could write his name on the slip and turn it into a table full of prizes. He was pretty shy about asking anyone about their number at first. I had to push him a little. He's no where near as shy as I was at that age!

After that we had some choices to make. Many rooms were filled with different activities. Mica chose art first. Isaak really got into a tub of mosaic wooden shapes. The art teacher printed out coloring sheets, laminated them and the kids could fill them with mosaic patterns. They looked like this:
Melissa and Doug makes a fancier one like this:
It's a birthday idea for Isaak. I never know if I should go for the cheaper item (since he had fun with it anyhow), or go more expensive? Melissa and Doug's version is around $30 as to where the other generic one is $10.

We had a good talk with Mica's art teacher. She seems VERY NICE!!! As Daddy says, "Not teachery!" To him some teachers seem stuck up, like they know more then most. They have a high pitch, looking down at you kind of voice. Luckily Mica's teachers seem down to earth and not "teachery!"

Mica drew a picture of Batman and Spider-man, while Isaak did his mosaic.

Next we went into the Science room. They had bins of colored marshmallows and tooth picks. The whole idea was to put 3D shapes together. Mica build a 3D triangle and then a bridge that went from one desk to another. Isaak sat around talking about how he wanted to eat the marshmallows. We kept telling him, "NO!" because people's hands were touching them all evening. 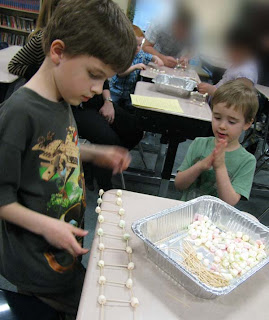 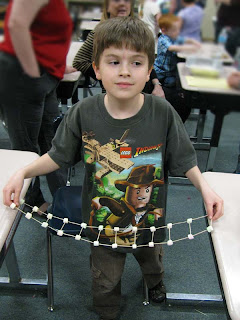 Next we went to the food room. In there they got to count how many teaspoons of dried rice and sugar filled up a cup. Isaak really loved that! Then they got to measure different things to make a trail mix to take home. Both boys LOVED that. One thing our boys do well is EAT!

They called Mica's name off 3 times to win things on the intercom. That was fun for him! I know he picked a checkerboard, Toy Story card games and I can't remember the other thing. Mica was so excited he was running around telling everyone, "I won three things!" Daddy got after him because it's bragging. I know that wasn't his intent. He was really just excited. It appears as bragging to others.