Mica's been having allergy issues. He's been sneezing like crazy! Both boys blow their noses now, but not very well. I bought some allergy medicine for kids at Costco. Mica's been using it. Isaak's been pretty ok so far. I haven't used the medicine on him.

Yesterday at rest time Mica came out of his room in tears. His eye hurt like hell. I felt for him. I know exactly what it feels like to have an itchy eye that just keeps getting worse! I was kind of iffy on eye drops for a six year old. 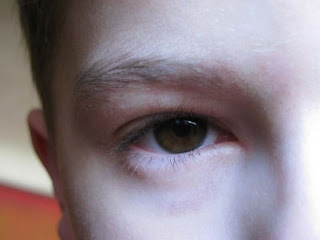 Here's his mostly normal eye (except for the redness on his right side): 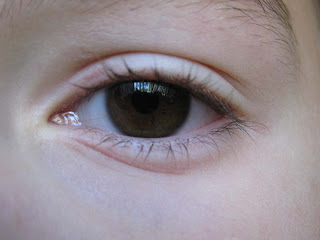 Bad eye on his right, better eye on his left (the bad eye was all red, kind of hard to see here): 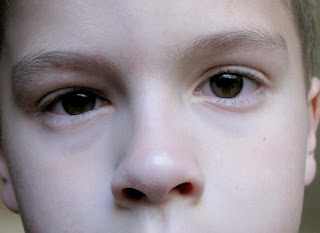 I gave his some allergy meds right away. Earlier in the morning I didn't give him any.

This morning his eye was worse! He had dried up sleepy seeds and a boogery nose.

After we had a muffin in a cup, which the boys LOVED and Daddy HATED I cleaned Mica up!

I don't care if the Neti-Pot appears to be gross, they help. Maybe not all day, but they help. I have two, so I let Mica choose if he wanted to use the one that looks like a genie lamp or a plastic squirt bottle? He chose the genie lamp one.

I was worried that he'd try it, start crying and never give it a chance again. He hates saline sprays. I explained to him the process and why it's good to use. He wanted to know if it would sting? I mentioned how if you use the wrong water or salt it can sting. Also if his nose was really swollen it sometimes stings. I assured him that I would use the right water and salt. I even used less salt then usual for him.

Over the sink my six year old went. At first it was just barely dripping out. He was really clogged up! Then it started to come out more. He blew his nose and lots of yucky stuff came out! Then we did the other side. Again lots of yucky stuff came out! We were both laughing at how much came out of his nose. I was so glad that he was happy to have done it! He even called Daddy afterwards to tell him how it wasn't as gross as Daddy thinks. It really helped him!
Posted by An Apel a Day at 10:45 AM

We adore the neti pot in our house! Both the 2 and 5 year old have used it. Man, is it gross, but it does the job. We actually use the squirty one, which can be more helpful when they're really stuffed up.