I have a flippen head cold.

Mica was stuffy all last week. I was thinking he had allergy issues because he never said anything about a sore throat and/or achy body. All he told us was that he had a headache. I ran the Neti Pot through his nose all week. He said it stung. It's because he was so swollen up in his nasal cavity. I came up with something clever, yet gross to try and get him to continue with the Neti Pot. I told him that it was great to do because he's a Ghost Buster. He had to fight off the slimy ghosts in his nose. My reasoning and the Neti Pot both worked!

I got on Mica for not telling me he felt like crap. I told him, "You can tell Mommy anything!" He said, "I didn't want to say anything to anyone." I said, "Mica I can help you better if I know what's wrong with you." He's going to be one of those men that refuses to go to the doctor. He handles pain a little too well.

I didn't know he had a cold. Yours truly (me) got it! I felt a sore throat on Friday. Then Friday night I knew it was more than allergies. I was achy all over, tried, stuffed up and couldn't sleep well. Daddy said I was snoring so bad, he left the bed. Attractive, I know - NOT! Today I'm trying to drink, drink, drink. Then I used the Neti Pot three times just to feel relief if only for a few minutes. I swear I should become a spokes person for that company. My voice sounds like I've been smoking for years. I haven't.

Daddy came in wanting to go to some fancy restaurant tomorrow. He called to make reservations. They were booked. He was bummed. He called another place. They were booked to. We never think of calling too much in advance. We just don't go out that often. I told him, "Don't worry about it! I can't breathe or taste anything anyhow!" He said, "I really wanted to take you somewhere nice. You deserve that." Inside I'm thinking, You wanted to go to someplace special because you wanted to eat there. I don't feel good, so being positive isn't on my mind.

I did manage to be a pretty decent Mom today. Sort of. I took the boys to swimming lessons. There we read books, while each kid was waiting on the other (swimming lessons are at different times).

I did fail miserably when I went to go get coffee in the Y lobby. I was only gone for 2 minutes tops. Within that two minutes Isaak got done with his lessons and he was sobbing because we weren't there. A Y coach was consoling him. I felt horrible. Then when we went out the door, I thanked the wrong lady for consoling Isaak. They look alike. She was probably thinking WTH! I didn't realize that it was the wrong person until I left.

Back to being a decent Mommy. I walked the boys home. We live close to the Y. They played. I did laundry and made them lunch. Then we went to Costco. After that we came home and picked June Berries all afternoon. :) I have probably 1/2 a gallon of them. The boys enjoyed it. I was so wrapped up into what we were doing; I forgot about not feeling good. 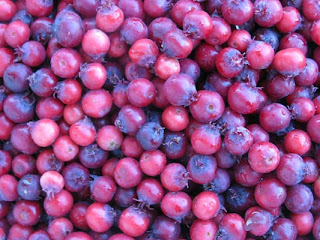 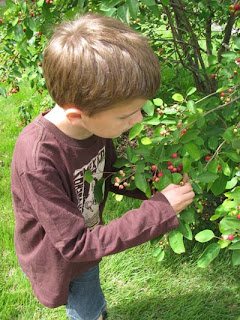 Then I came inside and made a Thomas train track that filled our living room. The boys haven't played with that stuff for awhile. Let me tell you Isaak's been VERY vocal while playing. It's like he hit a new stage or something. Yes the boys fight, but they also play now. I love listening to them play.

Now Mica's outside working in the garden with Daddy. He took a nap today. Yep my 6 year old often naps one day a weekend. His teacher said I am lucky. Isaak didn't nap. He went down at 7:15.

i totally feel you on the head cold!!! i was fine, but then it snuck up out of nowhere and knocked me down... i dont feel TOO BAD, but I sound like death! ha ha
hope you get to feeling great soon