I love names. Thinking of them that is. I'm not having any more children, but I still like to think about names.

Old names are back! I like some of them. What about you? My favorite older name is Harrison. I love the name Savannah Claire. The name Savannah isn't that old I don't think, but Claire is. Then I like Charlotte, Scarlett, Oliver, Maxwell and Jackson (Isaak's middle name is Jaxon). Not all older names have returned. I have grandparents named Dorothy and Marvin. Then I had a Grandpa named George. My Dad's Mother's names have returned. Marget gave birth to him and Lottie raised him. I actually heard someone name their daughter Charlotte and call her Lottie for short. I think it's pretty! Our boy's names are older names, but with a modern day spelling.

When I was little I'd have my friend Debbie over and we would cut out of magazines what children we wanted. They were each named; first and middle names. Then their rooms were cut out. We would give them each a pet; even though I'd never be able to have furry pets {allergies}. By the time we were done, we'd have like 20 kids, all different nationalities. Who needs paper dolls? Although I did like paper dolls as well. We made our own.

Our Barbies would all have names as well. I'd lay them all out in a row and between Debbie, my sister Terra and I we'd pick an even amount of Barbies to play with. Debbie had colored paper punches all over her floor. She refused to vacuum because the colored paper punches were our Barbie's food. Our end tables were Barbie's apartment. We had a Barbie house as well. The end tables were perfect because they had different floors to live in.

Our dolls all had names. We'd take them for stroller rides. We'd make tents out of blankets, ropes, chairs and clothespins. One single rope would travel across the living room. That rope would serve different purposes. It was the close line for our doll's clothes. It was also a zip line for our dolls. At the time I didn't know what a zip line was. I didn't even know that what we did, had a name. I took the old Fisher Price shopping cart out. The orange seat and handle came out of the cart. I took the orange part and connected the handle to the rope that ran across our living room. The dolls went in and zipped across. We had so much fun! I don't know if my parents still have this cart or not. If they do it's probably worth some money. It took me awhile to find it on the net. It's selling for $51 on a vintage site. 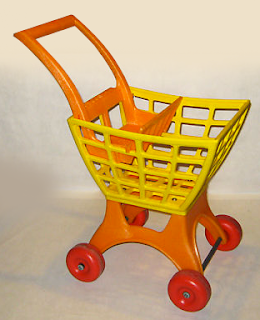 I don't really have any favorite names, but I really have fond memories of Big Wheels. I don't know if they make those anymore. I also loved simple toys like hula hoops, slinkies and jacks.

i like family names... that is where broxton got his name...
as for toys.... i like looking at the toys from when i was younger... but is it considered vintage yet? lol... hope not ;)