Last night I met with my Mom (Grandma Spiehs) and sisters (Aunt Terra and Aunt Angela) to celebrate our Mother's Day with our Mom. We usually meet out somewhere to eat and shop for a bit. We had this outing planed before Mother's Day.

We went to an outside a place called Firebirds. I couldn't remember where it was located in the outdoor mall. I'm so bad with directions. I walked the strip front and back and could not find it. Finally when I knew I was close I asked someone. The sad thing is, is that I've been there before. Like I said, I'm BAD with directions! Oh well. I still got there before everyone else. The food was great! Except everything tasted kind of salty. I think it's just because I don't add very much salt to my food in general.

Then we went shopping around. I went into two kids clothing stores that I've never been in before. I've been to both Janie and Jack and Carters online; just not the actual stores. I didn't realize that Janie and Jack is a sister store to Gymboree and Crazy Eight. I liked everything in it, it was just so high priced. Carters was just ok. There was nothing I saw where I was like, "WOW that's cute!" If you are looking for just t-shirts, they are a great store to hit up though.

Usually I shop at Gymboree, Crazy Eight, Target and Kohls for the boys. They seem to have what I like. If you hit Gymboree at the right time, they have great sales! Most people think of Gymboree as being high priced, but I've gotten $6 jeans for Mica and $8 robot pjs for the boys in there.

It was nice walking around with my Mom shopping around. I only ended up buying one thing, but I wasn't out to buy anything. I found army green cargo pants for Mica at the Gap. Straight off the clearance rack for $11. My younger sister Terra says that Gap is cheaper than Gymboree. She must be hitting different sales then I am.

Many people think that malls are passing away. Do you think this is the case? Do you shop online more than in stores? For me it depends. I NEVER buy shoes online. I've made the mistake of buying shoes for the boys and then they are too small by the time they come to us. I also have to try clothes on myself before getting them. I don't like skinny jeans for Mica. He has such little bird legs. Skinny jeans make him look like a stick character. He just looks silly in them.

To end this post...here's a picture of Mica and Isaak on actual Mother's Day. We were at a movie theater. They saw the guns in the entrance. It doesn't matter if the games were running or not. They were excited to blast anything away. They turn anything and everything into a gun! Even Melissa and Doug Ice Cream Cones. This is a part of boys I've slowly had to try and understand. I grew up with sisters and my Mom had all sisters. We pretty much had a girl world before the many boys in the new generation came along. :) I wouldn't trade them for the world. I just wish I could shop for one little girl. So many cute dresses out there! 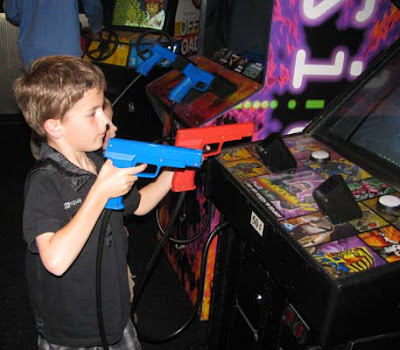 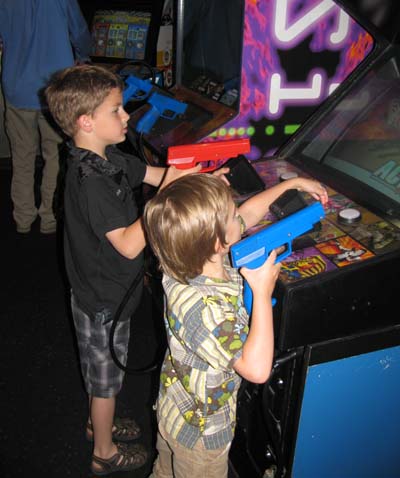 broxton is the same way with turning everything into guns these days...