I Met an Internet Friend in Person

I met my first internet friend in person. Guess what? I didn't get any pictures of us together. Oh well. My mind was on making sure everyone had what they needed. It was hot out.

I asked if Aunt Terra would want to come over as well? She did. Sara, my internet friend has 3 boys. I decided it would be great to set up the Slip n' Slide for all the boys to burn off some energy! I think I need one with 2 lanes. Terra's boys love our Slip n' Slide because we have a big back yard (for a city) with lots of hills! It's a pain to mow, but great for sledding, Slip n' Sliding, running and playing! I also wanted Sara to see Emerson. She's heard me talk about him. It was great because Sara and Brett (Sara's husband) had someone to talk to, while I got homemade pudding pops for the boys, drinks and chips. Daddy was working. :( I think he would have liked Brett.

Here's all the boys playing! They had fun! 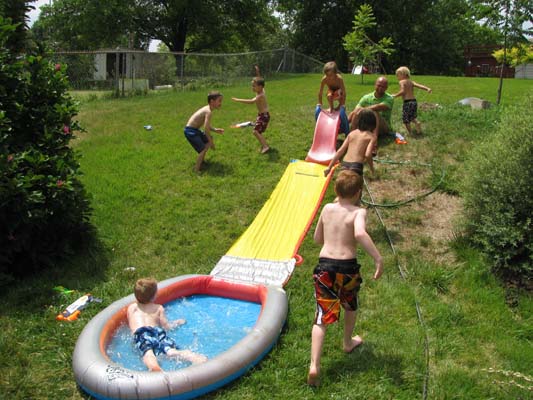 Did you happen to see my two boys in the picture above? It's like Where's Waldo. They are on the left. Mica and Isaak keep battling each other. It starts out fun. Then someone ends up fussing because the other hurt them. Isaak usually starts it. Mica usually finishes it. According to Mica it's Isaak's fault, he was just defending himself. According to Isaak it's Mica's fault for hurting him in the end. I told them no more kung fu, or Karate movies for awhile! Uggg! They enjoy Kung fu Panda and the Karate Kid movies. I like them to! Mica's birthday party is going to be based off of Kung fu Panda. If they can't stop fighting, then they can't watch them.

My boys play hard! Guess what they sleep hard to! I can get Mica who is almost 7 to take a nap! Isaak who is 4 takes a nap most of the time. I don't know if that's good with the combo of school, but they play hard; and get naughty if they don't sleep well. They took a 3 hour nap after everyone left! They would have slept longer if I didn't wake them up! 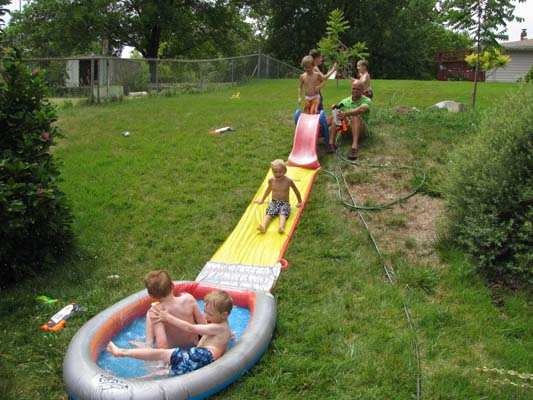 Who are Sara and Brett anyway? They own Snugfits.

My very first win, when entering a giveaway was to select 2 tees from Snugfits. They have all kinds of funny things you can put on tees and rompers for babies and tots. Then you can pick the color!


Isaak wearing his tees from Snugfits. 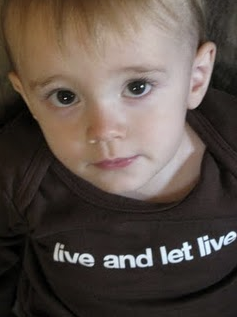 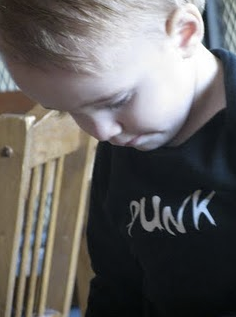 I was super impressed with the tees! The material is soft and doesn't shrink. It's so cool you can pick the color of the tee. I wrote Sara and thanked her. She wrote back and told me that no one has ever thanked her for their winnings, also that Brett (her husband) is from Omaha and he has a sister named Alissa. Small world. She told me that when I started doing giveaways she would be happy to giveaway a Snugfits shirt on my site. The giveaway was a while ago.

We kept chatting back and forth. Her son's are into surfing, how cool is that? There's a non-profit org that's called Surfers Healing - A Foundation for Autism. Her oldest has Autism. I would have never known if she didn't tell me.

So we used to email back and forth. We're friends on Facebook as well. Brett says I'm the only one that makes comments on their blog.

I was so happy to have them over! They seem like really great people. It wasn't awkward in least bit seeing them. It seemed like I knew them already.
Posted by An Apel a Day at 11:29 AM

Isn't it fun to meet blog friends? I love it! I'm so glad the kids enjoyed themselves so much, and wow to the 3 hour nap!

Oh Darn... no pictures of the two of you together. Maybe next time. I have met one blog friend and would love to meet more.