On Friday we had a Fall Festival to go to for Mica's elementary school. They don't have a class party; instead they have one big massive fall party. It's full of games, prizes, cake walks, bouncers, food and a haunted house. Many come dressed up.

Daddy and I didn't plan on dressing up. Then last minute Daddy said, "Where's that scary mask I own?" He decided to wear that along with one of my dresses. Ha Ha! I was waiting for Daddy to dress up and Isaak to finish dinner, so I decided to join in on the dressing up to. I have to dress up for work, so I usually have a costume for that anyhow. 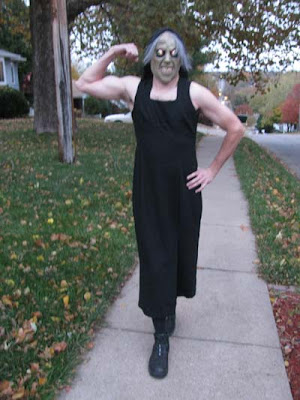 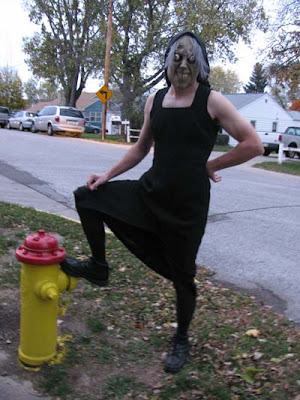 He got some pretty good stares, some kids avoided passing him (gee I wonder why?) and he got a lot of laughs. 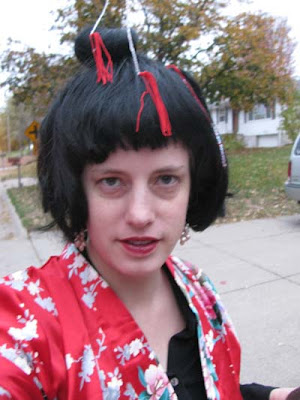 I'll do much better on the makeup for Halloween. Remember I was rushing.

Here are the boys: 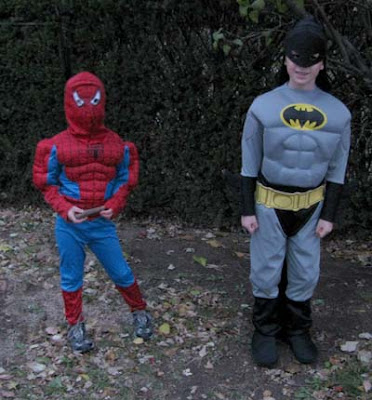 Isaak might be Buzz Light Year for Halloween. We haven't decided. That costume is from Mica. I most certainly didn't want to mess with wings for the Fall Festival. I'm glad we got a lot of use out of Batman and Super-Man! The Y had a super hero party and the boys dress up a lot in those costumes.

Here's Mica with one of his friends from school: 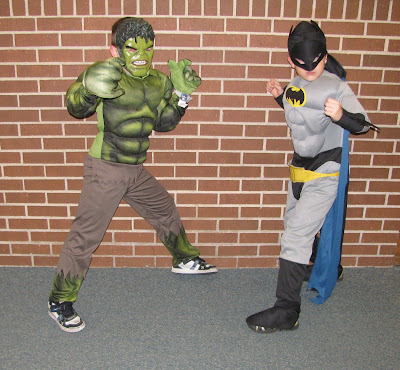 His friend begged Mica to go through the haunted house one more time. Mica did. Then his friend shut his eyes through the whole thing. Mica claims haunted houses do not scare him one bit. He's been asking to go to real ones that he sees advertised on billboards. I said, "Not until you are 10 or so." Even his cousin that is in middle school can't handle some of those.

*Note for next year: Make a few cakes. We got there early and they were already out of cakes for the Cake Walk. I kind of forgot about it this year. I didn't much see it advertised. I'll make a few next year. I always liked Cake Walks when I was a kid.

*Note for now: Any costume goes for Halloween. That's the fun of it. Look at my husband above! I have to say that I'm sick of the sexy costumes for girls and women! It's like we don't even have a choice. It's almost easier to dress up as a man than it is to dress up as a woman. I'm most certainly not going to dress up for work all sexy. I hate that young girls do not have a choice. Sexy is practically the only option.
Posted by An Apel a Day at 8:43 PM

Your husband is too funny! Of course, you and the boys look awesome in your costumes, too!

Hahaah, Your Hubby looks so funny dressed up. You look so cute in your get up.

I too like haunted houses but have gotten a little .... not scared bun concerned at times.

I love everyone's outfits but have to admit I cracked up laughing at your hubby's outfit!

how fun that he dressed up... there is no way marc would... much less in a dress...
so glad yall had fun!