The boys were so excited about going to Lion King on Broadway yesterday! 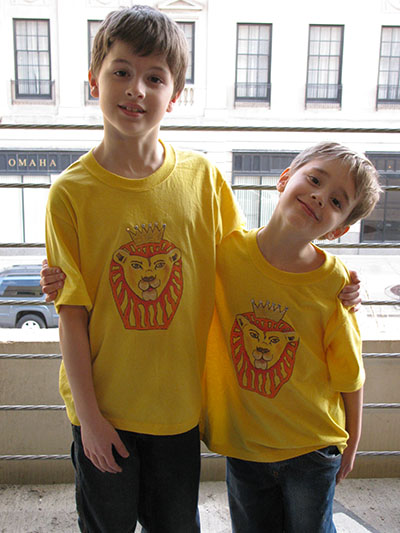 The excitement was so much that Isaak didn't take a nap. I tried putting him to bed early the night before; that didn't happen either. He had to go potty and shout out the details from the bathroom. It ended with us saying, "Isaak that's enough! Just go potty and get to bed!" Needless to say he was tired before the show started. It was a 7:30 show. When he lacks on sleep at home I put him down at 7. The latest he goes to sleep is 8:30.

When Isaak is tired he does what Mica used to do; act crazy! This is how Isaak hugs Mica, it's more of a tackle. Boys! 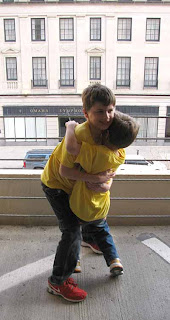 This is on the overpass: 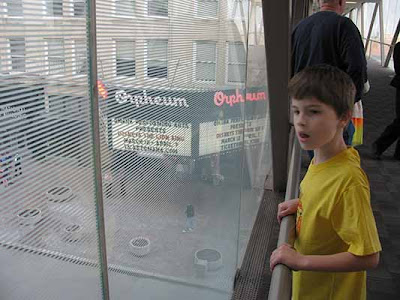 This is in the elevator. Isaak was so excited to have his own ticket: 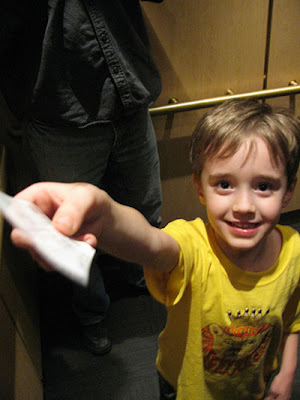 It all worked out like should have. The boys got to sit on the end of the aisle with their cousins; that are their ages. They were close to the animals that came down the aisles.

Here's the Orpheum theater. It's not my photo. I tried manual, flash and automatic, but the lighting was so dark! I was unsuccessful inside the theater. Of course when the show is going, no cameras can be used. The Orpheum is a really beautiful building!

The show was great. I kept looking over at Mica. He was on the edge of his seat, with a HUGE smile on his face, he kept tapping Cousin Evan, pointing, and laughing. Isaak and Cousin Elijah enjoyed it to, but they looked SO sleepy on top of their enjoyment.

Mica liked the young Simba best. We all agreed that the Rafiki was so funny and had a great voice! The best and hardest puppets to master had to be the elephant and giraffes. The bicycle with the Gazells was so intricate! The only mishap was that the sun in the end got hung up. It looked like it worked like mini blinds do. Part of it went up, another part didn't.


At intermission the first thing Isaak asked me was, "Mom is Simba's Dad really dead, or was he pretending? Because he wasn't moving." He kind of looked concerned. I said, "Isaak Simba's Dad did die, but Simba will learn that his memories with his Dad are locked inside him." Hopefully I answered that one right.

The boys sat through the whole show, fully awake. 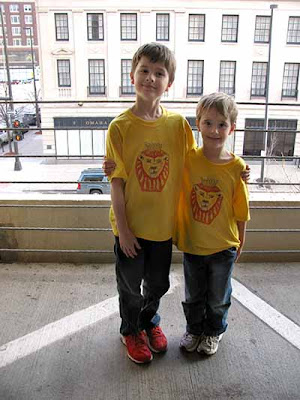 They both fell asleep in the car. Isaak looked like he had a hangover this morning. Grandma said, "Just bring him in his pjs in the morning with some clothes and we will feed him breakfast." He never slept in pjs last night. I ripped sleepy boy's clothes off and he slept boy style in his underwear; under the covers. Daddy got him dressed. I drove him and his muffin to Grandma and Grandpa's. Mica slept in as much as possible. I'm hoping he's ok in school today. It is just one day after all.

I think staying up late once in awhile for special things is fine too, and this was a good one. Glad you all had a wonderful time! :)

I can't sleep when I get excited either. Still love those shirts!!

So cute... and I am glad you guys all had fun... I can't wait to take Broxton to things like this :)

The joy and the memories are well worth any sleepiness today!

I am glad everyone had such a good time. I think your explanation was perfect about Simba's dad!

That is a really nice theater. Much nicer than the one we usually go to!

Glad you guys had fun! Once in a while letting them stay up late is worth it!

What an awesome show to be able to attend. I'm so happy for all of you!