I'm saving all my good photos for my WW. Come back here on Tuesday night if you want to see them.

A few weeks ago I had Isaak and Mica's pictures taken with their fancy Easter duds on. 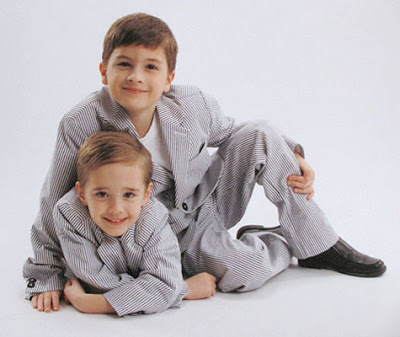 I'm not too crazy about the dark shadows below their hats in the next one. The boys like the next one the best though. 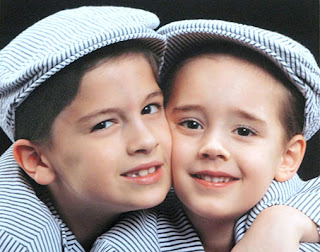 Here's Isaak at the mall. 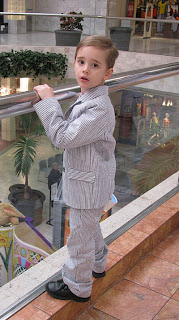 How was Easter for you? It was good on our end.

I go a little overboard with holidays. The Easter Bunny I have a scavenger hunt every year. I was smart and had my station downstairs this year. Laundry was done, while I stuffed eggs. Daddy was in the kitchen, so no one would have a chance of seeing me. I hid eggs in their closets, while it was still awake time. The boys were outside playing; when I did that. Each hiding area had one main egg with a clue to the next hiding area and a dollar coin for each kid. The clues don't give them a direct answer as to where to go next. They have to think.

This year I decided to get a little harder. I had one that said, "I like to hop down the __________. Go find 8 yellow eggs." Well they put on their shoes and went outside to go look on the hill in the backyard. It was down the steps inside. That's ok, they got their exercise. They finally figured it out. They love the hunts. It does take some thinking on my part though. I kind of have to do a lot of it on the spot because otherwise even I get confused as to how many eggs I was supposed to be put here or there.

This year I hid less candy. Other eggs had mini erasers that were truck shaped in them; that I found at the dollar store. Isaak was really excited about them! Then the dollar coins were special to. I found blue stuffed bunnies for a dollar each at the dollar store to. Mica's asked for a blue bunny to match his blue bunny he got from preschool. I don't know why he wanted it. He's not a stuffed animal kid, but that's always been his favorite. He was very clear that it had to be a blue, boy bunny. Try finding that! They got 2 movies, an outfit and 2 DS games I got for a major deal at Christmas time.

The boys got to watch Teenage Mutant Ninja Turtles, which they got from the Easter bunny. It's not my pick of a movie, but I knew they would love it! Daddy finally came to life (he's not a morning person at all!); he talked to Mica about the artists the turtles were named after.

While they were watching their movie, I made the veggie tray for my aunt's house. It was 4 sections that looked like this: 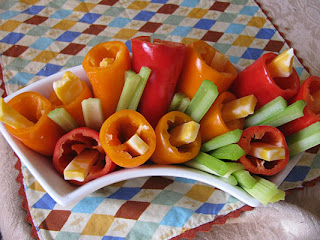 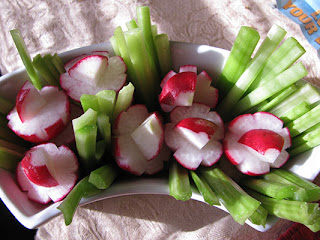 Mini carrots and cheese carrots; I cut out with a cookie cutter. More celery grass. 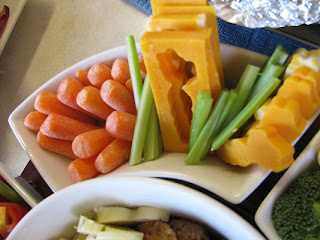 I made beer bread to.

Then we headed off to my Aunt Sam's house. There, we had a big meal, another egg hunt for the kids and an egg toss for the middle generation (which would be me!) I dropped the egg many times and it never broke. I caught the egg and it broke all over me. YUCK! I think my aunt should have given me warning that, that was to take place. I would have brought a change of clothes! 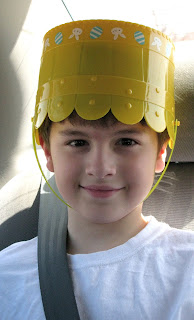 By the end of it all the boys were tired and whiny. Isaak tried running from me when it was time to leave. He cried about having wrinkly hands in the bath again. This time he was like, "What's going to happen to me now Mom? Tell me!" Me saying, "Nothing." didn't fix his issue. He cried harder.

Mica begged to watch Madagascar 3. I kept saying, "No. If you are going to keep whining about wanting to watch that, you will go directly to bed." It was 6:30. He said, "Mom I'm not whining!" Then he said, "Ok if I stop whining can I watch it?" Total contradiction there! Mica also tried to argue with me about how we never ate lunch. We had a huge meal at my aunt's house! Then when we got home we had veggies, crackers and cheese for dinner. Somehow he forgot about all that.

Oh my goodness, he really does get worked up over the bathtime wrinkles!

They looked super cute in their Easter outfits!

I am glad you all had a good Easter. Mica and Isaak look great in their Easter outfits. My family and I have been enjoying the long 4 day Easter weekend. Today is Easter Monday in Jamaica. Have a good day Alissa.

Maybe you need to show Issak how you get wrinkled if you are in water to long too. It must be devastating to him.

If those are your bad pictures, I can't wait to see the good ones on Wednesday.

Glad you guys had a great Easter. I love all the healthy snacks you had.

The boys look adorable, as usual and I can't wait till Weds to see the rest of the pictures.

Sounds like tons of fun! I LOVE what you did with the food. Looks fantastic! Bucket Head is cute.

Hey, you found some nice shoes to compliment the outfits! Yay!

My kids start to get whiny after a big day too. Actually, my 9 year old was fine all day yesterday. She saved the meltdown for today. Ugh!

I LOVE the photos :) and your food looks great too... I wish I had creativity like that, but nope.. not at all...
I agree with the wrinkles in the tub, he is getting worked up over it... I say show him how it works for you as well.... maybe that will make him less worried ?

I adore that pic of them in the hats - so adorable!

They look adorable! So handsome!

I like how you displayed the veggie trays. As usual, very creative!