It just turned warm the day before Easter. Worm enough to be outside in shorts.

Isaak wanted to go out and play, so he did. Mica was right at his side. They shot Mica's bow and arrow.

They came inside after awhile of playing. I told them to go potty before we went to the grocery store. At the store I threw Isaak in the cart. He was picking on Mica. I saw that Isaak had a big wet spot right between his legs! I said, "Isaak why are you wet?" He said, "Mom I peed outside. I just couldn't get to the bathroom fast enough." This is rubbish. I know he can make it; he just chose not to. When we got home I had him change.

When he woke up from his nap he went potty, and back outside to play. Little man wet his pants again! I made him put all his laundry away. This is nothing new really. This load he had a lot more pants to fold and put in his drawer. He said, "That's a lot to do!" I said, "You peed your pants twice! You put them away!"

Grandma thinks he should not be allowed to play outside the rest of the day if he pees his pants; due to laziness. I think that's a great idea. I wish I would have thought about that!

Speaking of lazy...a week ago he put his pants on backwards: 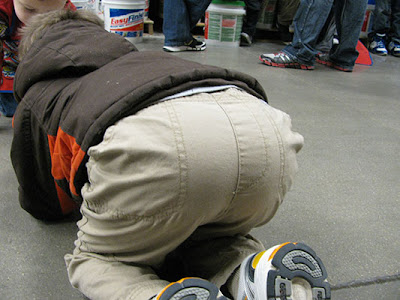 I noticed it at the Lowes Clinic. I told him to take his socks, shoes and pants off in his room and turn his pants around. He told me he did. We went to Aunt Terra's and his pants were still backwards.

Lazy butt! I hope he's not going to be lazy with his homework when it comes to school!
Posted by An Apel a Day at 7:11 PM

I could have written this.

My 5 year old ALWAYS has either his pants or underwear on backwards and also, is too lazy to come in and pee sometimes, so he ends up having little accidents.

I don't think he should have been made to stay inside, though - he'll learn...eventualy.

LOL... those pants had to be very uncomfortable. Kids!!! LOL they will drive you to drink Alissa.

I wonder what he would have done if he had to pee? Probably just pull his pants down.