Mail4Rosy posted this before me. It's a post about stepping back in time. 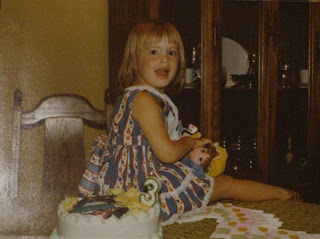 1. How did your husband pop the big question?

We met in college. Travis followed me around like a puppy. I was still hung up on my past punk of a boyfriend. You know that phrase, "You don't know what you are missing until it is gone."? Well he left school at the end of our sophomore year. I was sad about that. I dated guys, but wasn't happy with them. Later I went to grad school. It was then I realized that I wanted to be with Travis. I told him how I felt.

He met me at the airport. I had a Cracker Jack Box with a fake plastic ring with a note attached that said, "Will you marry me?"

He got the ring, smiled, but didn't really say anything.

That same evening he proposed. He made a real ring for me. Of course I said, "Yes!'

2.What are the three most surprising things about married life?

a) Our religious differences. I won't get too much into this, but we do have different thoughts on religion. We both have good values, so that has bridged the gap.

b) We both expect one another to drop things that we are doing to get things done. That annoys both of us. Somehow we still both do it.

c) We both have taken on our own responsibilities. I make sure the laundry is done, do the dishes, shop for the clothes, go through the clothes each season, we both cook except he does more than I do because he gets home earlier, he mows the yard and fixes things when they need fixing. Right now he helps Mica with his homework before school because he leaves later than I do. I'm sure the homework thing with change next year when Isaak's in elementary school.

d) We happily have the same taste in decor, cars, the boy's clothes and even with food.

e) Travis is much more serious than I am. That balances us out. He's more silly now. I know when to not mess with him. He's a night person, I'm a morning person. I used to be the opposite, but having kids changed that. I get up with the kids on the weekends. 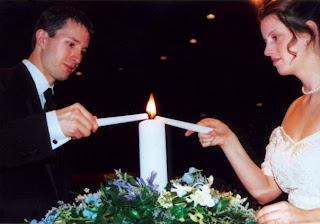 3. How did you find out you were pregnant for the first time?

We were trying, my period was late, and my breasts were sore. Sorry if that's too much information. I took a test, and the line was so faint! I  didn't know if I was really pregnant, or not. Some part of me knew I was though.


Mica and I almost 8 years ago 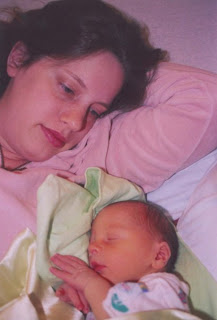 4. How did you choose your baby's first name?

I heard the name Micah when I was in high school. My good friend had a cousin named that. Then we had a friend in college named Micah. I always liked names that are easy to say, but slightly different. Travis thought to spell it Mica because it's a shiny silicate mineral with a layered structure, found as minute scales in granite and other rocks, or as crystals. Travis loves rocks, arrowheads, so on and so forth. I didn't expect Travis to be as picky about the middle name as he was the first name. I love the boy's middle names as much as their first names.

5. Describe where you see yourself 10 years from now.

I hope working on artwork more. It's been hard because for the last 8 years we've had one not in school full time, Travis and I never have the same weekend, and maybe those sound like excuses, but in my mind they are valid. One can not do everything. Sometimes after 8-5, which ends up being 7-6 I'm beat.

6. Describe how you find bliss either with words or images.


The quarkiness of my kids and how many people I'm around are so creative. Even the people in my family that do not consider themselves to be artists are creative. My sister Terra makes things all the time. My Mother-in-law makes jewelery out of rolled up paper, my Father-in-law builds stuff with wood, my Mom sewed doll clothes for us back in the day, my Dad and Travis are always making things.

Box Seats they made themselves 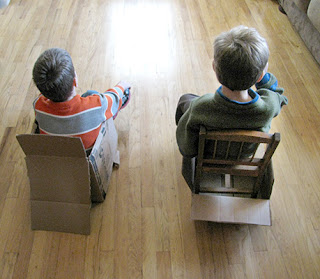 Bow and Arrow.
If you don't have a feather, color, cut and tape one, or two to your head, or just made one out of a hanger and Tinker Toys. 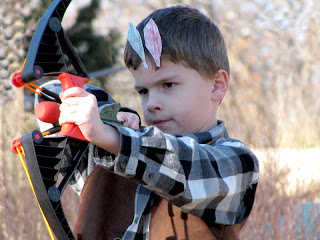 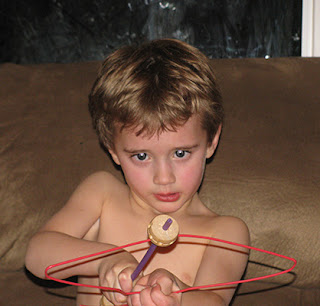 Even their expressions can be silly! 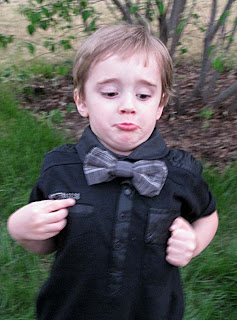 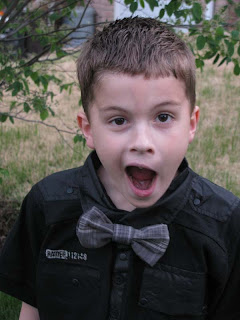 Muscles, or a backpack? Why not both? 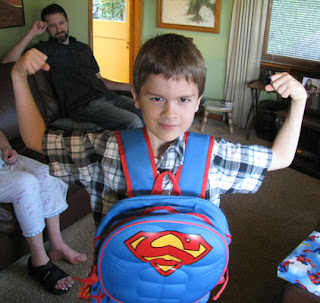 So nice reading and learning more about my blog friends. You looked beautiful in your wedding picture.

I am loving these Old School Blog Posts! I love to learn more about my blogging friends. It's like catching up on the earlier part of their lives I missed out on :)

And LOL at taping feathers to your head. Very creative indeed!

I LOVE this post. I have seen a few people do this over the past week and I've loved reading everyone's stories.

It's awesome that you and your hubby have the same tastes in most things. My ex and I disagreed about almost everything, but lucky for me, Chris is really laid back and let's me pick pretty much everything out.

This is such an awesome post. I love your wedding picture, you guys were hawties. :)

The picture of you and your little one, awwwww, he's so tiny and beautiful!!!

I think your boys looks so much like you did when you were little.

This was such a fun post to find this morning. :)

This is wonderful and I'm so glad I followed Mail4Rosey's advice and stopped in to read it. And I'm totally copying the idea for my site now. ;)

Rosey sent me too. I enjoyed reading about your family in this post.

awe
love seeing all the photos ... and look at travis with a clean shaven face :)