The Things They Say

For some reason this is floating around my Omaha friends on Facebook. It's creepy things kids have said. It must have been on the radio, or news.

My kids have said some creepy things. Mica used to stand over me saying nothing, just staring at me when he woke up before me. He wasn't saying anything, but it was pretty darn creepy!

This last weekend we went grocery store shopping. We passed through the meat section and Mica stopped in his tracks and said, "Mom is that a human body?" It was big hunk of meat. 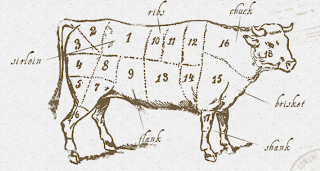 We got up to the check out and the guy in front of us had tons of meat. He was either stocking up, or having a BBQ party. Mica got a little too close to the gentleman in question. I said, "Mica back up a little bit." Mica said, "Well I just want to know what kind of meat that is?" I said, "He thinks that is a human body!" Out loud. The man laughed and said, "If that was a human body, this place wouldn't be open."

Tonight in the car Isaak says out of the blue, "Mom I'm going to climb the house like Spider-Man. It's ok if I fall and die."

I'm like, "?????" Kind of crazy coming from a kid who doesn't like the idea of people passing away. Just an FYI we rarely talk about death and we don't watch the news until they are in bed.
Posted by An Apel a Day at 11:42 PM

Kids, with their active imaginations, don't need the news, etc... to stimulate the 'creeps'. I mean, c'mon, have you taken a look at a fairy tale lately?

The spiderman part was cool until I saw fall & die. Yikes. It's crazy the stuff they come up with, huh?

My son turns everything into a gun and it creeps people out, lol. Yesterday in Home Depot he picked up my paint roller and started "shooting" paint cans. *sigh*

And LOL on you saying 'maybe.' buwhaha

Kids never cease to amuse with what comes out of their mouths. My 9 year old just got the freedom to ride around the block on her bike by herself. When I gave her to go ahead, her eyes got wide and said "Well, what if somebody steals me?" I told her- "Well, when I find you, you'll be in trouble for letting yourself get stolen, so you better be sure not to stop and talk to anybody" lol.

That was funny when you let him think it could be a human and not beef... LOL... you better be careful because paybacks can be a .....

ha ha ha... that is too funny! we were talking about the different meat/animals the other day and i told marc at the rate we were discussing, broxton was going to be vegetarian :)