I was in love with the Sitting Bull Hero T-Shirt as soon as I saw it! 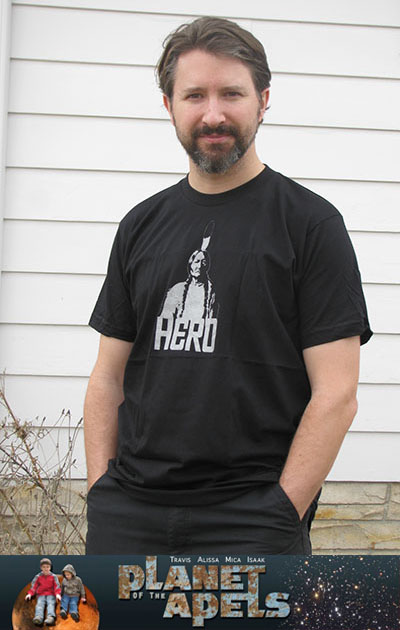 All the t-shirts at Ban T-Shirts really push the envelope. They seem to really have valid points to them. Most I see eye to eye with, others I don't. The point is, is that everyone should have the right for freedom of speech.

A few that stood out to me is:
I could go on with other t-shirts they have that I feel passionate about the message behind them. Ban T-Shirts has t-shirts that have a point, create important dialog and wonderful design.

Why did I pick the Sitting Bull Hero T-Shirt?

I wanted to get this t-shirt for my Dad. Like I said he's super tall, and skinny. He needs special tall sizes for his shirts.

I got it for Travis otherwise known as Daddy. He was so excited to have a package finally come for him! He's worn the shirt twice. I've washed it, and it didn't shrink, or fade at all.

Our little family had a chance to see Brule a Contemporary Native American Dance, music and stories. It was so inspiring.

I also really love the artwork of Native American Nora Naranjo-Morse. She is featured in the movie Inspirations that I show in my Art Media Techniques class. She strongly believes that we need to protect the earth.

This summer we are going to South Dakota for vacation. The kids will be so excited! This t-shirt will be packed to go with us.

What does the Sitting Bull Hero T-Shirt mean to Ban T-Shirts?

From Their Site: Sitting Bull Hero T-shirt. Tatanka Iyotaka was the spiritual leader and chief of the Dakota Sioux. He is well-known for defeating Custer at the Battle of the Little Bighorn in 1876 after being driven from the Black Hills by gold miners. -Ban T-Shirts 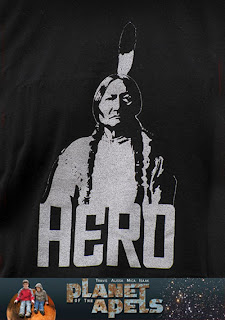 Check out other t-shirts that Ban T-Shirts has to offer. If you feel really strong about a certain topic, they may have a t-shirt that matches it.

If you had to pick a hot topic to make into a t-shirt, what would it be?

Disclaimer: The opinions on the post are my personal take on the product. This blog is a personal blog written and edited by me. I am not compensated to provide my opinion except for receiving the products themselves to test out. I did receive a free product to help with this giveaway.

I love when peoplwe wear t-shirts expressing how they feel about things. I have one that says "save the manatees" :)

Very cool shirt! I'm with Keith. I like shirts where people can say express what they feel. While I don't have any myself, I do love a tee shirt with something cool on it. Beats a boring plain tee any day!

Being as my Mother had some American Indian blood in her.... I love that shirt too!!!

That is a wicked cool shirt! There are a lot of native americans here in MA (obviously) and I'd like to see more people around here wearing stuff like this than some of the other stupid shirts I see.

You've got me curious to look at the site. I'm surrounded by Indians over here, my husband is half Potawatomi and his father's side is full-blood. Many of them still do the crafts, basket weaving, costumes, pow wows, etc. It's interesting and we go to support/visit them sometimes.

We recently went to a Native American funeral that was astounding, with the big drums and such playing. Everyone felt it was surely the way the man who'd passed would have wanted his funeral to be.

The race is pretty sparse though. My youngest is the .25 minority in his class. ;)

our family has Native American in us. I spend a lot of time doing genealogy. I am often one of those push the envelop type people so these shirts are right up my alley

He looks great in that tee shirt. That's an interesting theory your "Grandpa" had...holds true for Americans but I'm pretty certain I'm not of Native American descent...pure 100% Polish...though given how often my country was taken over, I've probably got some German, Austrian and Russian blood in the mix!

I think it's neat when people wear t-shirts to express themselves. As long as it's not too offensive to others.

i love shirts that make you think. some are just dumb... but some are thought provoking

I love the shirt! I know my hubby is a t-shirt kinda guy and he is definitely a hero to our 5 boys!