Mica announced to us in the fall that he wants to be an inventor. He wants to invent a submarine that has newer technology. He said, "It will include an iPad." At his school an art event they had, the art teacher had pieces up that showed what they want to do when they grow up. Most of the other boys did something where they could add camouflage. Mica's stood out as being different. I'm not saying this in a bad or good way; it was just different. The kids had just studied Picasso's collage movement, so they did their pieces in a collage style.


We went out to dinner a few weeks ago. They gave the kids crayons and plain paper. Isaak drew a girl that looked like a character in Wallace and Gromit The Curse of the Were-Rabbit. He didn't intend that it looked that way; he insisted on writing the movie title out when Daddy pointed out that his drawing looked like her. I think it's the hair! 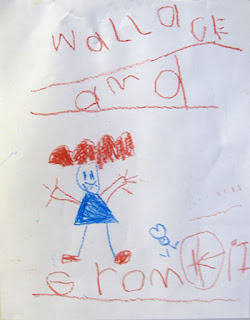 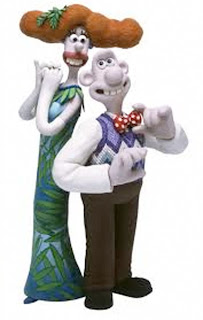 This last weekend the boys were starting the day of picking at each other. I was thinking, Oh great, it's going to be one of those days! Then I looked over and saw that they were both working on what they were calling, "A Dot to Dot". It ended up being a great day. 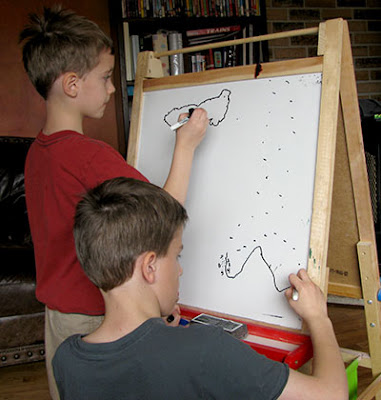 Thank you so much for linking up! Please enter my low entry giveaways: A Star is Born or Cabaret on Blu-ray and OraMD All Natural Toothpaste - 3 winners.
Posted by An Apel a Day at 2:39 PM

Well done to them they look amazing ;-)

Yay for a great day!

Love that Wallace and Gromit picture. Curse of the Wererabbit is a favorite here.

Your sons are very creative Alissa! Thanks for hosting and Happy WW!

I do believe in all's well that ends well when it comes to siblings. They cannot be on the straight & narrow with each other all the time, but in the end if the day works out to the advantage of all, what more can you ask?

Everyone needs a little Picasso.

I love their imagination and creativity! :)

Looks like the boys worked out their differences, great projects!!
Hope you can stop by this week!

I love that they are both interested in art :-)

Your boys are so cutely creative! ^.^

Love the collage your son made! Different is always good!

I love coming here and seeing their artwork! They definitely have skill!

I think it's great to be different! He's a great little artist!

Love the collage! They did a terrific job!

Great projects! Thanks for hosting and have a great week.

I love when they start making drawings and giving them out. Very nice thanks for sharing and Happy WW.

I love your sons artwork! And congratulations on your future sub designer. you never know, I am married to a rocket scientist, they are out there.

LOVE!! Kid art is so precious!

It's nice to see your boys working/playing together. And I like your son's scuba art that stood out from the rest. My son never had a brother. Thankfully he got to grow up with other boys that feel like family to him.

Yes, definitely a beautiful creations of these young artists!

Looks to me like the artistic gene is definitely being passed on to the boys!

I like the sub idea, but iPads will probably be dinosaurs by then. ;)

The work is cute, the little guy's even got flippers on! :)

They must get their artistic talent from their mama :)

Definitely looks like your boys have fun being creative!! :-)

So creative - and talented. Love them all!

Have a great day!

Oh Jeeze... even Issak draws better than I do. Must be an ole chip off your block

Oh Jeeze... even Issak draws better than I do. Must be an ole chip off your block

I love their art, just wonderful and creative.
twinkle at optonline dot net

Love your blog! Would love for you to link up on A Peek Into My Paradise T.G.I.F. Link Party on Friday!

Love your blog! Would love for you to link up on A Peek Into My Paradise T.G.I.F. Link Party on Friday!

i love that the creativity with you and travis has totally been passed down to the boys!

I love when kids get along! lol