We went downtown last night. They have a park with big gigantic metal slides there. I took the boys there, while Daddy went to go fix a sign that was at a gallery he has his artwork in.

It was so odd. There was this adult male sitting in the center of one of the slides; just talking on his cell phone.

He was on his phone for about 20 minutes. Part of me wanted to say something. I was afraid to. I didn't know what kind of person he is.

Another part of me wished a kid would just go down that slide full force on waxed paper, and smack right into the guy - oops they didn't know he was there. Of that is wrong to. Two wrongs do not make a right. I can still think it though. 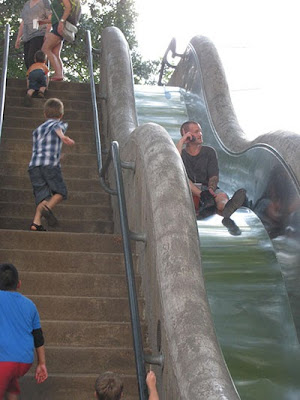 All the Moms were giving this guy dirty looks when their kiddos were standing in a line to use the other one.

He finally looked up and said to no one, "Sorry I had to take that call." In the middle of a slide, REALLY?

These slides are much more fun with wax paper under your butt. Daddy grabbed some, but left it on the table. Oh well. They played tag and kept going down the slides. 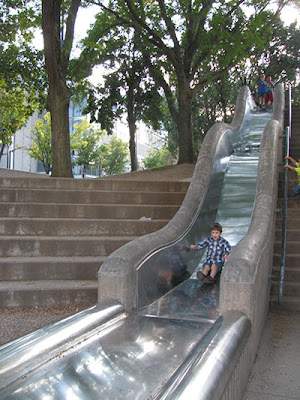 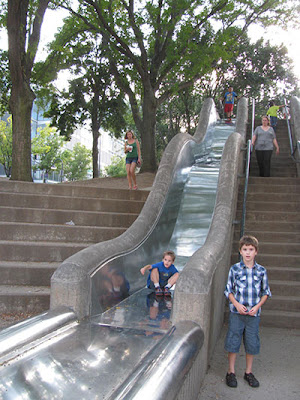 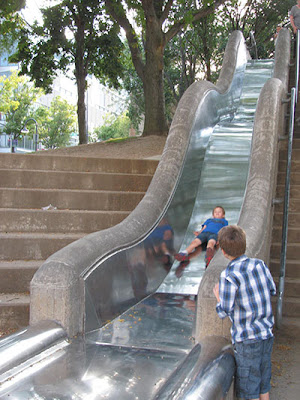 In the end they were wore out and sweaty. Mission accomplished.

You were wise not to interact with that individual. He obviously had a screw loose, and there's no telling what he might have done if he got angry. Erratic and odd behavior in public is natures way of saying "don't touch."

I think it would have been funny if a kid slid down the slide and and hit the guy on the phone! He might have ended his call sooner! ha ha
twinkle at optonline dot net

How rude of him! It would have been funny if a bunch of kids started yelling at him :)

That's just plain rude - guaranteed my little man would have went down the slide and hit him (just like you sorta wished for). He has no shame and would have hit the guy just to prove his point that it's a playground for KIDS.

My husband gets mad at me when I confront strangers when I am alone or just me and the kids, but I totally would have politely asked him to move, all the while palming my pepper spray on the chance he got loud with me.

i used to would have said something... but now that i have broxton, i am so much more cautious...
that slide looks so cool!!!

Looks like a fun slide. I so would've opened my big mouth and said something to that guy. That's just rude of him.