Mica Was the King of Play Dates This Last Weekend

We wanted Mica to play with someone, while Isaak was hanging out with Aunt Angela.
Somehow, someway communication isn't always on board. Daddy sets the playdates up most of the time because he picks the boys up from school. Some of Mica's friend's parents are from Africa. There's a language barrier to get through as well.

One kid Mica has been raving about. Mica's wanted him to come over for awhile now. We'll call him Boy A. The trouble is, is his mom's phone broke. We can leave messages, but she can't get them.

We have to work on phone etiquette with Mica!

Mica's Phone Message to Boy A:

"I've been waiting a long time for you to come over. Are you coming over? Oh and this is Mica."

He decided to try another friend. We'll called him Boy B. It to was awkward, but not as awkward because I told him exactly what to say. Boy B's Mother was impressed that I make Mica use the phone. She has older kids, and says now a days they only know how to text, not talk. Boy B couldn't play on Saturday, but he could play on Sunday.

Boy A's whole family came over and wanted to take Mica to the library to read books, and play on their computers. Later they came and played at our house for awhile. It was great; I just wasn't expecting it. I was kind of glad Boy B didn't commit to that day!

Sunday came and Mica called Boy B again. His mom said the day before that they could play at Boy B's Grandma's house. She lives right behind us. Boy B has come over to our house a few times.

Mica's Phone Message to Boy B:

"Hi this is Mica. I really want to go to your Grandma's house instead of my house. When will this occur?"

Daddy and I looked at each other and both said, "Occur?" and started laughing.

Mica went over there around 1, and played for a few hours.

He got home and had a soda in his hand. 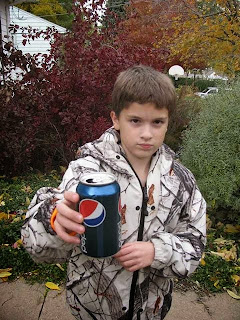 He said, "Mom they gave me a Pepsi. I didn't realize it had caffeine in it; until I read the back of the can. I'm going to go dump it out. It really made me feel full."

We don't drink soda regularly. They do. Not a big deal. Mica felt it was a big deal. To him it was like they were drugging him.

The next morning Mica told me that he told Boy B that his Grandma's house was boring. I didn't say too much that second. Sometimes I need a few minutes to process what to do, or say with my kids.

At breakfast I said,

"Mica do you remember that Little House on the Prairie where Nellie told Laura her house was boring? It made Laura feel so bad. He shook his head yes. I want you to go to school and give Boy B an apology.

I made Mica practice like I was Boy B. That to was just about as awkward as his phone messages. He practiced a few times. Daddy said he'd stand there and observe the apology before school to make sure it happened.

It isn't just Mica that is awkward with the phone. Boy B did call while we were gone, and his message wasn't understandable at all. As for the rudeness factor, well we've heard that to. When Mica's had friends over they've asked us why we don't have candy and cookies around our house? Our food is boring.
Posted by An Apel a Day at 3:46 PM

Well, that's the process that teaches socials skills. Nobody is born with them. And some of us never learn them at all......

but you can always go live on a mountain top in the middle of the woods, where social skills are not at a premium. ;-)

I burst out laughing at his use of the word occur. That is absolutely hilarious!

it's good that you get him to practise proper phone etiquette.. what with texts and all these days, it can understandably get rusty, even for adults!! Good take on using the Little House on the Prairie story as an analogy too :)

LOLOLOLOL! Mica is adorable. My boys would probably say something similar, but I set up all playdates with their friends, so they never call (or leave messages) for their friends.

Phone calls at that age are always awkward sounding. Allison will be in the middle of a conversation and the other person will just say "bye". Not I have to go, just bye lol

My son cuts people off when he's ready to go by saying, 'okay here's mom' and handing me the phone. lol

Hahaha... well Mica does get his point across. You have to give him that.

Broxton is not a fan of the phone too much... but he will have to learn to use it ;)
glad that he had a busy weekend..