On Saturday we set out to go to a wedding where we only sort of knew the people that were getting married, and their kids. 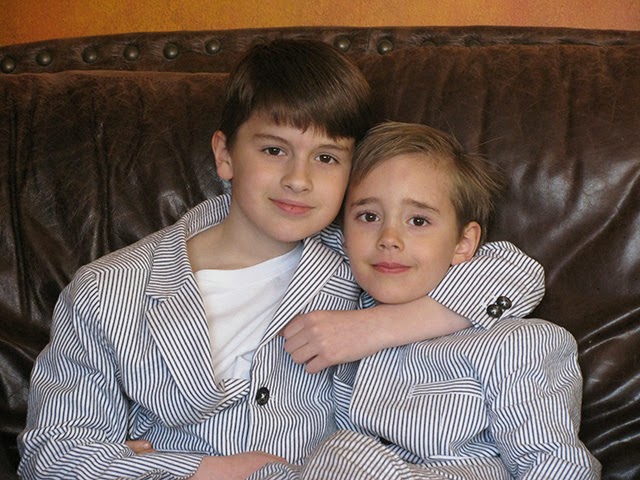 Really Mica's sleeve does fit. It just looks like it doesn't because of how his arm is around Isaak. 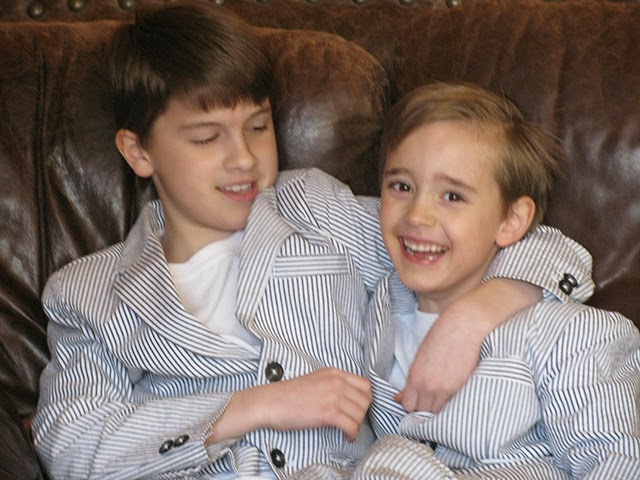 Isaak is in their son's class. He's only been on playdates with him twice.

Their son likes our son, and vice versa. I was sure their son's face would light up when he saw that Isaak was there. Sure enough his face did light up. He ran to Isaak, and hugged him. He kept coming up, and saying, "Hi" to Isaak before the ceremony started. He had the hugest smile on his face. Seeing that made it worth it.

When the flower girl came down, she dropped fake flower petals. Isaak said softly, "Mom can I have one of those?" I said, "No. Leave it on the ground." He along with Mica kept trying to get just 1 petal with their foot. I think they ending up getting 2 each.

It was an interesting ceremony. It was in Korean and English. The Mom is from Korea, and the Step Dad is from here. I love that our kids were introduced to a different type of wedding. My Step Grandma is from the Philippines, so I as a child was introduced to that culture often.

They had someone sing in English and a group of young adults sing in Korean.

Instead of having a unity candle, they had containers of colored salt. Each family member went up to pour a different color into the jar. It was a symbol that they were all one. Regardless of the color of their skin, they were one. I thought that was pretty cool.

When they did the sand pouring Mica and Isaak kept saying, "They are going to do a Science experiment!" I kept, Shhhing them. I have to admit it was pretty smart thinking on their part.

We didn't end up going to the reception. The rest of the day was pretty busy. Aunt Angela offered to take the boys to the zoo, while we headed to an art movie. I'm not sure how much food we would have been able to eat (being on a special diet). We wouldn't of known anyone to talk to. I was curious if the reception was different, or very similar to the ones we have here.

I wish I could ask the people in front of us about the white powdery cream they had on their cheeks. 3 of them had it on, and I don't know if it was a custom to wear that for a wedding, or what it was for. I of course didn't ask, and Google that answers almost everything isn't answering that.

Have you ever been to a wedding that was different from what you are used to?

I have been to a Portuguese/Jewish wedding where they combined both of their traditions into the ceremony and reception.

It was nice that they invited you guys and it sounds like it was a good experience for the boys.

And they look so handsome in those jackets.

Thats funny, I wonder why they wanted flower petals.

My niece married an African American last year. Everything was pretty much what I was used to, except they did the jumping of the broom at the end. I thought that was kind of fun!

I've never been to a wedding of a different culture. Sounds interesting. Your boys look absolutely handsome in those pics.