So...I never posted about Father's Day. I edited the picture. I swore I wrote about it. Nope! I must have been in la la land with that one. The odd thing is, is that I even remember linking up to the restaurant. It was going to be my WW this week. I realized on Tuesday that I didn't have a WW in my feed. I made the superhero boys be my WW. 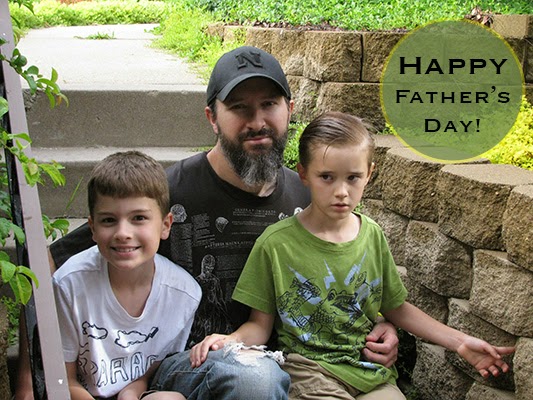 Any how here's my handsome men on Father's Day. We were not sure if we should even go anywhere at all. Isaak said, "My tummy hurts!" He looked white to. I think for a few weeks the boy was having growing pains. His tummy hurt often in the mornings, and he'd be fine after 10 or so. He had all kinds of other pains during that time to. We're thankfully past that.

We decided to try out the same place that my sister's and Dad AKA Aunts and Grandpa went to the day before. It was a repeat for me, but new for everyone else. I ordered something different anyhow. It's called FirstWatch. Do you have a FirstWatch where you live? It's new for us.

They are only open the first part of the day; that's where they get their name. They have healthier options for breakfast, which is what I love. Everyone seemed to like it there on both days I went.

Thankfully Isaak didn't have any sick issues. I was a little worried about that.

We've been so busy that we didn't really do anything else with Daddy.

He's been trying to get some molds done to take down to Kansas City, so they can cast them, and he can include them in a sculpture show in the fall. He's also applying for a few grants, getting a press release out for the gallery that his work is in, getting a wedding ring set done, and applying for something else to. He's been working tons of hours at his other job. Two of his co-workers are out of town. He was hoping to work there part time all summer. Nope...He's had to go in more than full time the last 2 weeks. Even Isaak's had to go into work with him. Isaak doesn't seem to mind too much. He takes toys, watches movies, and plays with a kid that also comes to work with their mom. His boss is so different than mine; mine would never let me take my kids to work. It's been crazy around here.

I keep telling Daddy to go work, get things done, while I man the fort. The only thing I refuse to do is mow. My allergies will go nuts.

Sounds like a great place to have breakfast. Wish we had one near here. Hope Isaak's growing pains ease soon!!

I won't mow, either, but it's not even my allergies - I just hate it.

Growing pains suck! Hope he grows out of them quickly!

I haven't heard of that restaurant, but it sounds good!

I haven't heard of it. It sounds good though, I like the healthier choices on a menu. That's a great pic you got of your three guys.

I've never heard of FirstWatch. Great pic of the three guys in your life.

Oh man... Fathers Day wasn't all that long ago. We were getting ready for our trip to Atlantic City the next day.