I Hope Everyone Had a Happy 4th

Two days ago we had no idea what we were doing for the 4th. Then Aunt Terra called, and invited us over. She was having our cousin Stacy over. Stacy has a 3 month baby girl, Terra has a 2 month baby boy, and Emerson is like a baby, but he's now 3. Stacy also has a 3 year old son. Then there is Terra's others Evan and Elijah that are our boy's ages. It was kid crazy there. My parents AKA Grandma and Grandpa came to.

I tried getting a good photo of Emerson, but was unsuccessful. Terra got a few of him and I together. She took some with her camera to capture bubbles being blown at us for our birthday invite that will take place next weekend. Emerson giggles when bubbles are blown at him. It's pretty cute. Here's a photo I took from her: We all brought a side and our own meat. I brought a Quinoa Salad *recipe will go up later, the works for Strawberry Shortcake, and stuff for Hamburgers. If you celebrate, what did you eat for the 4th?

I did get some cute photos of my youngest nephew Edison AKA the boy's youngest cousin. Isaak still calls Edison, "Ederson". It's pretty cute! I love his redish hair. 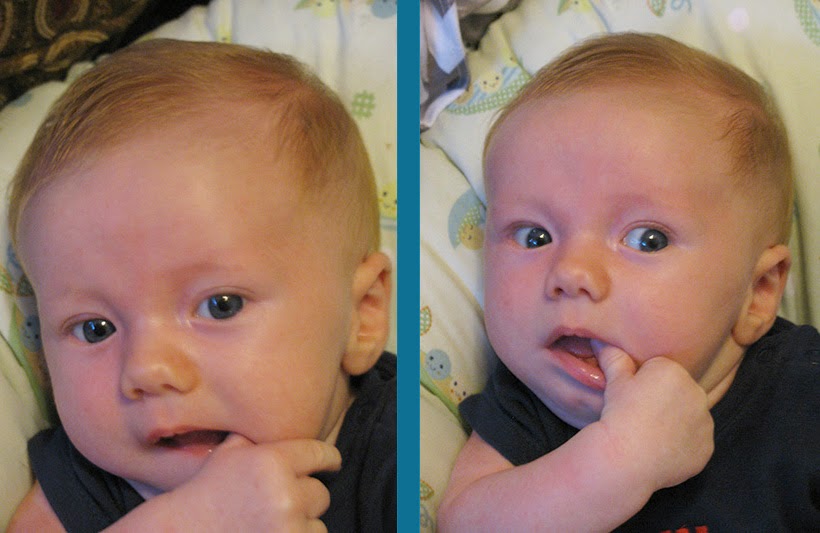 After we ate, we went up to a local school parking lot, and we lit and watched some firecrackers. We had a great view.

The only sucky thing was is that it was windy, and cold for July. The babies didn't much like that. 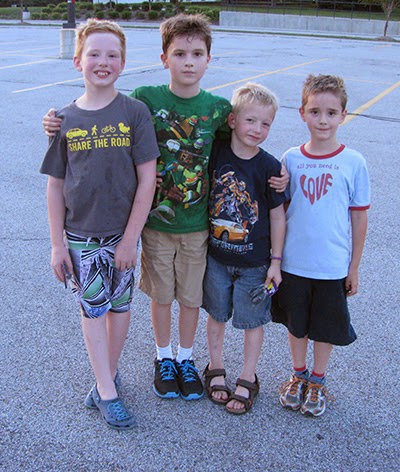 It's pretty cute because Mica kept walking with Evan, and their arms were around each other. They were chatting about Indiana Jones.

Mica has shirts in his closest that are red, white and blue, but according to him and Daddy he could wear whatever he wanted. Teenage Mutant Ninja Turtle shirt it was. They are named after Italians, drawn in Japan, but they do live in NY. Isaak looks like he's wearing a Valentines shirt. It's actually a British John Lennon quote, "All you need is love." It's red and blue. This mom - me way over thinks this kind of stuff.

My boys weren't the only ones that mixed cultures for the holiday. I made red, white, and blue Parfaits for breakfast yesterday. Daddy said, "Parfaits are French." My comment back was, "Whatever."

We had a pretty good time with cousins. 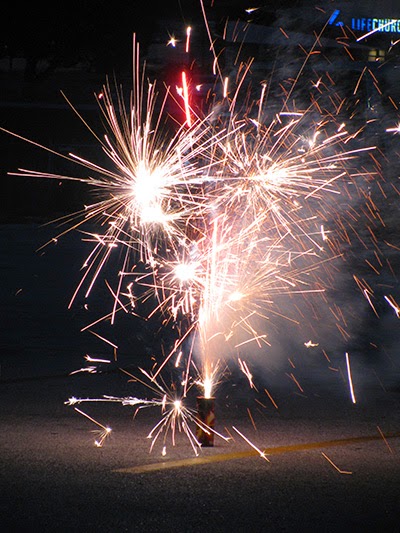 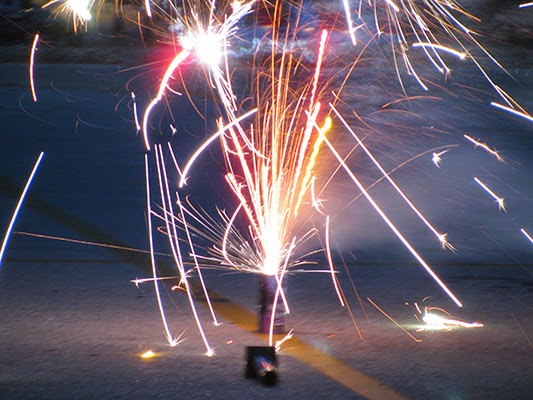 My family growing up was never into the 4th of July much. I finally learned last night why. My cousin Stacy told me that our Grandpa was always worried about his daughters loosing a finger lighting firecrackers off. My Grandma was a nurse, and she told him stories about accidents that happened during that time of year. I guess that carried onto my Mom's generation. My boys like firecrackers. I think they are pretty, but that's it. I'm not crazy about the noise they make, the pollution they create, and the accidents that happen. I'm thinking I get these thoughts from my own parents. We never did much of anything for the 4th growing up. We just sat and enjoy the neighbor's firecrackers.

Are you big into firecrackers?
Posted by An Apel a Day at 5:52 PM

Email ThisBlogThis!Share to TwitterShare to FacebookShare to Pinterest
Labels: 4th of July

We saw the previews for a new Teenage Mutant Ninja Turtles movie coming out soon when we were at the Transformers movie. It looked good. When my grown up kids were little, the TMNT characters were very big. I think we still have some of their action figures around here.

I do like fireworks, but not as much as I did when I was a little girl. I actually couldn't wait for the show to be over last night because I just wanted to go home and go to bed. I guess that's what comes with aging lol.

I love going to see fireworks, but we actually didn't make to any this year. We had that hurricane on Friday, so most towns canceled their dieplays or rescheduled them for nights we can't get there to see them. Oh well...next year.

You do have a bunch of cute littles in your family!

My son got ash in his eye at one of the fireworks displays this year. I took him and flushed it at a place that was open (the town bar, gah, but it was empty except for a lady giving her cat milk, lol) and when we were home and he was sleeping I looked it up. Turns out it's not uncommon at all. We'll not be sitting close again next year, lemme tell ya'

what a fun time. we watched lego movie with my parents.. ordered pizza and watched a few fireworks on tv. ha ha ha

Cute pictures! My twins are really into TMNT. However, one of them is banned from watching it right now, because he told a kid on the playground he was going to rip his heart out (and he got it from that show).

Cute pictures! My twins are really into TMNT. However, one of them is banned from watching it right now, because he told a kid on the playground he was going to rip his heart out (and he got it from that show).

We had a very quiet 4th. Our town set off fireworks the night before.