Isaak goes through the knees of his jeans faster than I can blink. I knew over the weekend Children's Place had a sale on denim, and Old Navy had a store wide sale. Children's Place isn't at the mall closest to us. We went to Old Navy. I have to say that it ended up being cheaper than buying jeans at Target.

When I was checking out at Old Navy Dad said, "Oh I should check and see if they have a belt for him." Why he insists on getting the boys a belt these days I'm unsure of. Really that's what adjustable waists are for. They didn't think they had a belt for boys, then found one, while I was checking out. I waited, while he was on the belt mission.

In the meantime the boys were over by the mannequin family hanging out.

I don't mind when they are having fun if they are not annoying other people. I'm not ok with them fighting, or running off. Thankfully those days are getting less! We have no temper tantrums. We're pretty lucky really; our boys never were the types that would throw themselves on the ground, kick and scream in a store. They did however pretend that the grocery cart was the Polar Express train. They'd yank on the safely belt, and said, "Stop the train! We're in the middle of ice. Stop the train!" and make chug, chug, chugging noises. That was funny at first, but after that it became annoying.

I heard giggles when they hung out with the mannequin family. I guess they were over there making faces at people that walked by. If anything they gave other people giggles, and laughter is good for people.

I've learned as a mom that you have to choose your battles. Getting mad at kids for having fun isn't a battle I want to choose. I did say, "Don't touch the glass." They didn't.

Daddy went over, and took a photo of them. An awful photo, but a photo none the less. It's so funny that Isaak was embracing the mannequin mom. 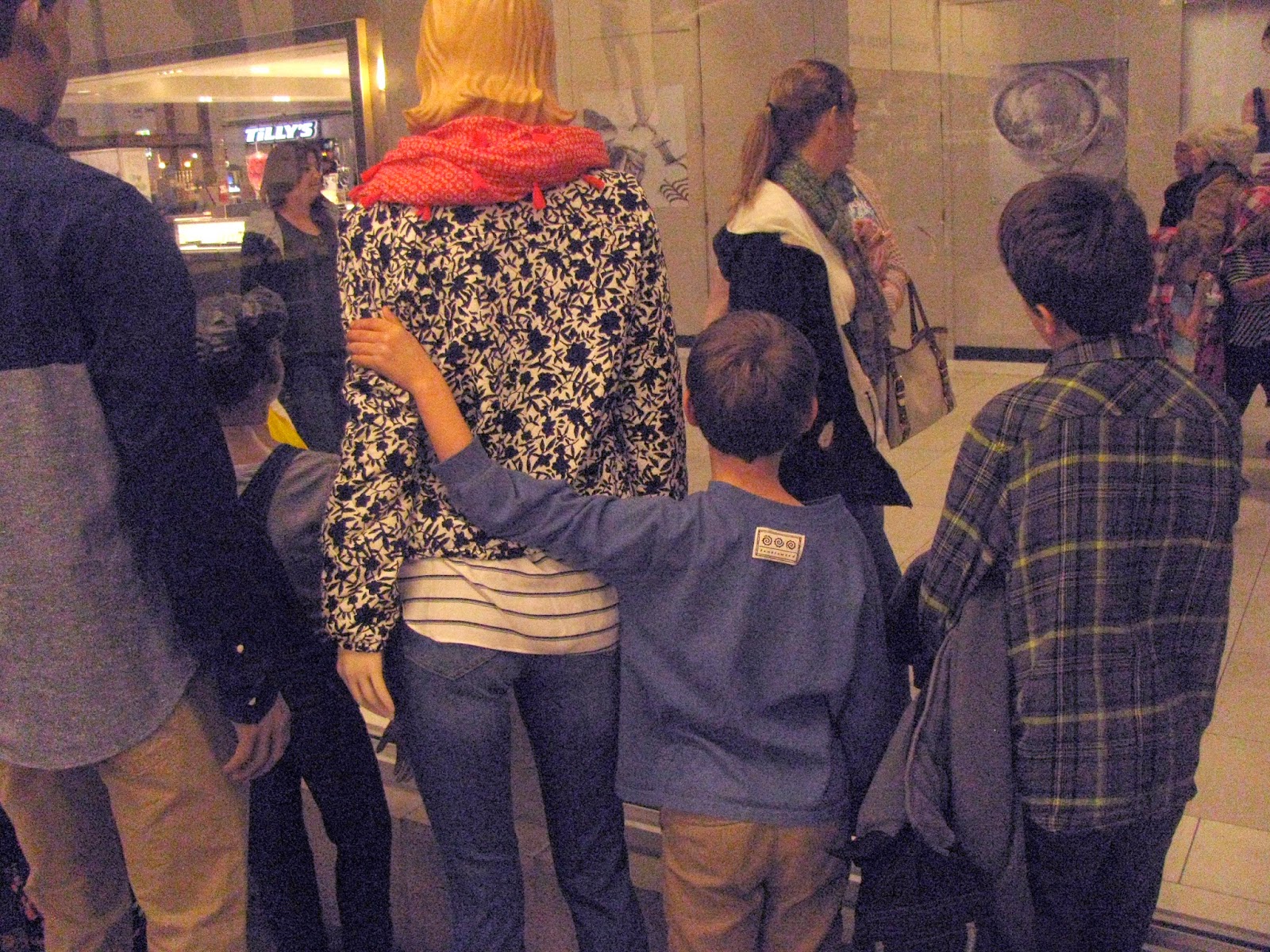 Now I know my older sister would roll her eyes at me that I didn't stop them from doing this. When I told her that Mica likes to dance for store cameras she said, "And let me guess you let him do that?!" Yes I let him do that.

Again I choose my battles, and to me that's not hurting anyone. Kids will be kids. Pretty soon they won't want to have fun in public because it will be embarrassing.

This was a few years ago. Mica hanging with his mannequin family again. He looks like he fits right in except for the fact that he has a head, and they don't. 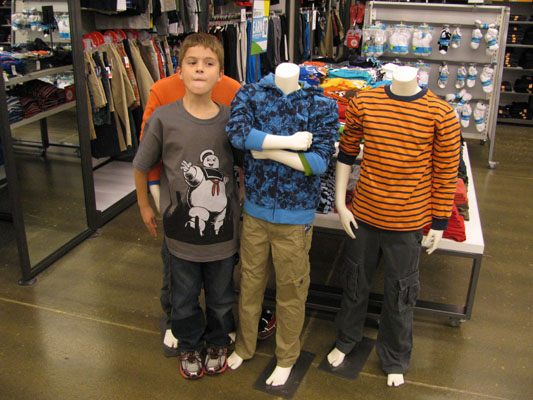 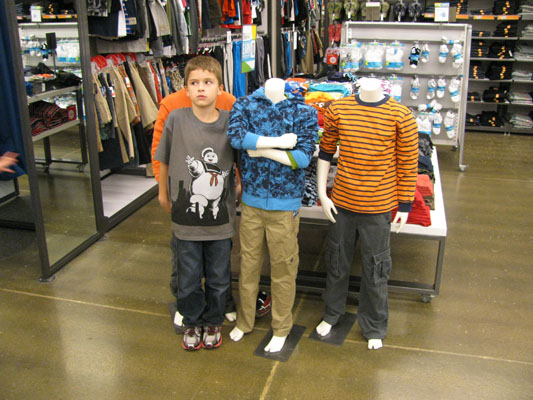 They do have great jeans sales there.

Your kids are a hoot. I think they get a little of that from their Mother.

Let them be kids... The world makes them grow up to fast already! Glad you had fun... and I am with you on the belt, we don't bother.

Haha, those boys are too funny! It's great that they are so imaginative.

My kids get holes in their jeans pretty quickly too. I agree with you, you need to carefully choose your battles with your kids. Most things that they do are not worth the fight.

haha my girl likes to do that too! She treats them as "friends" and start to adjust their clothes, hold hands with them etc. I've to keep watch as I'm scared she'll pull/tug them too hard and they'll fall on her!

I want to treat my kids like that when I have them. I agree, let kids be kids :)

Imagination is the cornerstone of intelligence; it's great you let them exercise their imaginations in such fun ways! (And I'd probably be right in there with them, lol.)

you're right..kids will always be kids...and I would do the same as you..it's not hurting anyone..Isaak and Mica are so adorable :)

Like you, I think it's all about choosing your battles. I think it's funny that they were hanging with the mannequin family.