In some ways changing your looks can be as simple as getting your ears pierced, or dying your hair. Where do you draw the line with how far is too far with plastic surgery? Are we too judging when it comes to it? Many times I look at someone that has gotten a some plastic surgery job, and quickly notice that they went too far. Most of them were pretty with how they looked before. 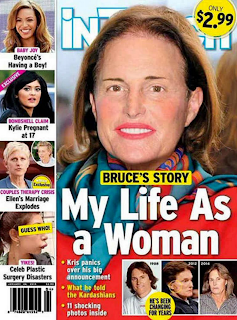 I remember watching Escape to Witch Mountain as a kid; it was cheesy even then, lol.

It's obvious your student has some painful associations there and think you handled it in the only way you could.

Plastic surgery isn't all bad; I had it done when I was 14 and it was lifechanging. Having said that, I'm averse to the notion of having unnecessary surgery myself... not really my business what others do with their own bodies, but I think they could use a sensible friend. Someone who will say "Snap out of it! What on earth are you thinking?"

I loved Escape to Witch Mountain when I was a kid. I loved the remake with the Rock, too!

I am really interested in hearing about Bruce Jenner... I guess because its becoming such a big deal now (he has a show coming out to talk about his "journey" and I am nosy and want to know what the journey was)
I could care less what he does, but I am eager to hear what he has to say... He put up with a whole lot with Kris and all, so it should be interesting

If someone wants to alter their appearance, I'm not one to judge. I wouldn't take drastic measures, but I do color my hair occasionally.

You know, I never watched that movie... But I do watch Kim and Kyle on The Real Housewives

Can't say I've ever watched Escape to Witch Mountain. I'm neither here nor there when it comes to plastic surgery. It's not my body so I don't care. However, I do think some people become a little addicted/obsessed with it. I had deviates septum surgery done a few years ago. It helped me be able to breathe better but it was one of the most painful surgeries I've ever had.