One thing I really love is all the family friendly things that Omaha has.

I have a friend that I've had since I was in preschool that was in town. We contemplated on what to do. I didn't mind if they came to my house, but we have kids that like to run about. A few of our other friends were meeting up to. One suggested we meet up at Midtown Crossing at Turner Park.

Every Monday night (June 1 - July 27) Midtown Crossing at Turner Park has a free movie when the sun goes down. That's not all that's free. They have popcorn that's free, yoga for kids that is free, and a nonprofit organization was handing out bottled water that was free. I'm pretty sure they made their money off of cotton candy, and other food stands that were around. There's small eating places around the perimeter of the park.

We knew we wouldn't be able to stay that late. Here it doesn't start to get dark until 9. That's when they put the movie on.

We all brought a blanket, food, drink, and card games.

After we were done eating the 2 seven year olds danced in front of the big screen. I'm sure we weren't the only ones laughing at them.

Mica brought Family Talk cards geared towards stimulating conversation. I thought it was a great idea.  It was fun for the first 25 questions. After about the 200th question that Mica asked we were all done with the game. 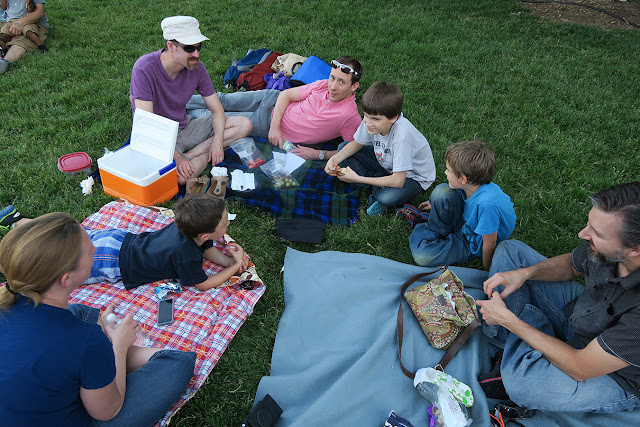 The boys did their free yoga. I had to give Mica the stare down Mom eyes to go over to do it. They're supposed to be lifting their tummies up, but it looks a little more like they were star gazing. 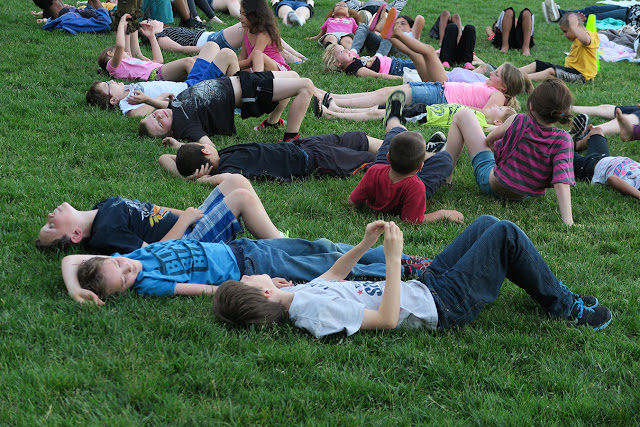 The adults played other card games, and just talked.

I was cracking up because my friend's son was super into Karate Kid. Isaak and Joey played Karate Kid.

Mica must be too old for that because he sat out. He was more interested in talking to us about Johnny on the Spot Porta Potties.

Thank goodness my friend didn't mind that the 7 year olds were playing Karate Kid. I totally didn't care. You know how some parents are, "Oh no you'll get dirty!" or "Heavens sake you're going to get hurt!" Sure that can happen, but boys go through a stage where playing Karate Kid is the bomb. The kids set their own ground rules, and had a blast. Isaak said, "Ok you can kick me here, but don't kick me in the stomach ok?" For the record Joey didn't kick him in the stomach. I'm sure they have tons now. 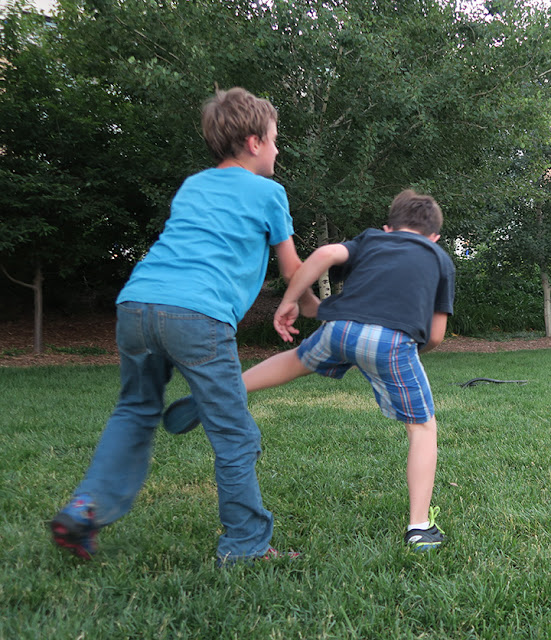 When they were just about to start the movie we left. It was The Hunger Games Catching Fire anyhow. Not really kid friendly. Now if it was Karate Kid that was playing, we may have stayed.

We also had to get home because the boys are in summer school this week. They signed up to be in fun summer school with my nephew's school district. Mica's in two classes called: Mining for Ore and Animation/Claymation. Isaak's in two classes called: Big Top Art and Circus Routing Writing.
Isaak sure did get a work out playing Karate Kid. He fell asleep in the car ride home.

It was 9:20 before we got home. Two sweaty boys needed a shower!
Do you have any free events where you live?

That's cool you guys get free events like that. I am sure our city has some, I just haven't looked into them yet. I do know we get free workout classes downtown every Saturday, but the girls aren't really into going to them.

What a fun night you guys had. I love all the fun stuff you guys do!

I'm sure there are some free things near us, but most get super busy and I don't feel like dealing with crowds

You are lucky because Omaha does have a lot of things to offer. Our little town.. not so much.

Sounds like a great day! We hve free things to do here as well. In fact, since Jman (who is in college) started dating (eep), he needed ideas. Hubby shared with him the wonders of google. haha. How to search free things to do (insert hometown). It's awesome!