Last week when Travis went to pick up the boys he saw Isaak in pain. He was hunched over, and just complaining saying, "My bladder hurts!" Isaak said he just started hurting about the time school was about out. Travis rushed him home, had Isaak sit on the pot to go to the bathroom.

Our Conversation on the Phone:

Me: "Then it's more than likely not a bladder infection. I hope it's not his appendix! Ask him where it hurts?"

Travis: "In the middle below his belly button."

Me: "I'd think it wouldn't be his appendix then. That's off to the side, but kids act different than you'd think they would. When my sister had her appendix out when she was little she hunched over like that to. You said he pooped right?"

I repeated all the same questions to Isaak. I made him some tea. I told Travis to set up a bed for him on the couch, plug in the heating pad, and to call the nurse. Thankfully the boys' doctor's office has a nurse on call all the time. I was trying to get the rest of us some dinner, and coddle Isaak at the same time.

She told us to go to the ER. I had my doubts thinking, We're waisting our money! Then I thought, This is our kid! It's best to be on the safe side. Travis gets annoyed with me because I'm not quick to rush to the emergency room.

Sure enough the doctor didn't think it was his appendix. He wanted him to get a scan just in case. I was thinking, Are you sure this is
necessary? Isaak was happily bouncing over to get his scan. I was thinking, I'm paying for this. He's fine! If I don't have him get the scan it seems like I'm that Mother that doesn't give a crap!

The boy was full of crap! We've hardly had constipation problems in our family. If anything the opposite.


He was watching Alvin and the Chipmunks. 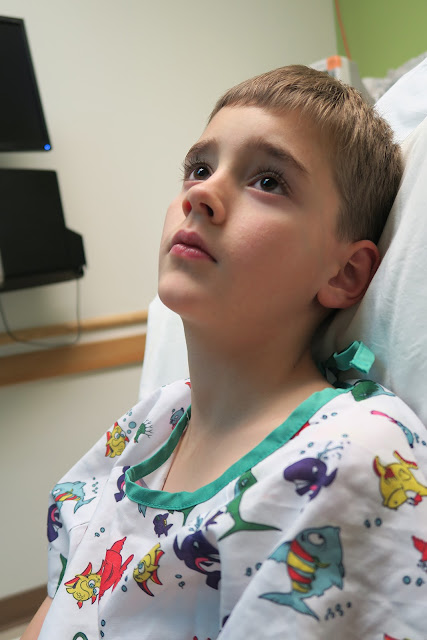 The boys eat really well actually! BUT last weekend I told the boys they could eat my broken cookies. If you remember I dropped a tin. They were eating way more than they should. Like shoveling the pieces in their mouths. I cut them off, but I think they snuck more behind my back. I know the cookies were the culprit. They just are not used to eating that much sugar and flour.

We had a choice: An enema, MiraLax (a stool softener), and/or fiber bars. I decided that MiraLax would be the best choice. I wasn't sure how Isaak would go for an enema. Then I told the doctor I'd put Benefiber in our smoothies in the mornings.

The doctor was talking to us like it happens to all boys much of the time. Being full of it has never happened to us.

Isaak was so worried he'd miss school the next day. He has perfect attendance so far.

He went to the bathroom 4 times before school. (Thank Goodness) Every time he went I said, "That was the most expensive poop EVER!" I'm scared to get the bill on that ER stay!

Travis walked him into school to talk to his teacher about letting him go potty whenever he needed that day.

I found out Travis was giving the boys my cookies for after school snacks. I said, "Nope! Only at Christmas time, and New Years! Let them eat fruit, nuts, seeds, or veggies for a snack!"
Posted by An Apel a Day at 10:22 AM

Poor little guy, and poor you! Glad it's all been sorted.

I had no idea that eating cookies could do that to you! I hope Isaak is doing well now!

Glad he's doing better. My oldest has been constipated before and Miralax worked like a charm for him.

OH NO...
Hate that he had to deal with it, but at least it wasn't anything major

hope he feels much much better..it happens with the kids sometimes. But you're right, better safe than sorry..

Good for you.... I wonder why Travis would feed them cookies when gluten is so bad for you. Binds us up.

Glad he's better now! I am like you and hate dragging my kids to the ER, or even the doctor. Mariah will find a tiny spot and think she needs to go to the doctor right now. I'll tell her to monitor it for a month then if it's not gone, we'll go. She gets so pissed that I don't fret over every little bump. When she has to pay those doctor bills on her own, she'll understand. So far, she's still alive, so I guess I've made some decent calls so far lol.

I think it is kind of common - we have a friend who went through the exact same thing with her daughter! And they tend to get plenty of fiber too.

Glad it was just constipation. As expensive as it might be, it's still great that it was something so easily fixable. :)