As you can tell I have a new header, social media buttons, and domain name. Behind the scenes I've been wanting a new look for awhile.

I took photos in the fall of my kids eating apples. I had pictured what I wanted in my mind. Per usual the situation was not perfect. I got them to stop pestering each other long enough to snap some photos by letting them eat apples.

Ok all was good. I knew I'd have to merge two photos together to get what I wanted -done. One kid always looks better in a photo, when the other one looks wacky. That's why I take several photos. I was ok with the turn out. That was until I uploaded the photos, and saw on my big screen that Isaak's fingers were gross - see below. My cute 7 year old had been digging in the dirt when I was setting thing up. 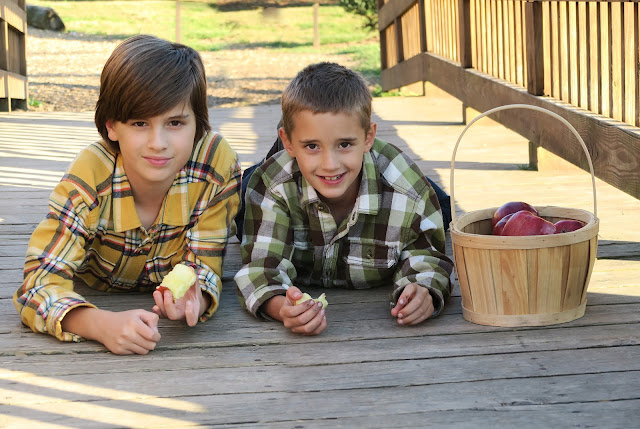 I was thinking I'd have to reshoot. But...fall was pretty much over. I wanted the lighting of late fall. Sunlight beaming, not the dead look of winter.

Then I had problems with my computer. It was making all the lights in my pictures pixelated. It kept happening off and on. You know when your car acts up, it's not consistent, so they can't fix it?  It was like that.

Finally my computer took a long break of pixelating images. I felt like I was out of the 80s, and into the now. Isaak's fingers weren't as hard to fix as a I thought they would be. What you see on the banner is a cleaned up image. It's not perfect, but it's far from his messy little self. Truth be told: Isaak is the kid that always has messy fingers, and holes in the knees. He'll put holes in his knees in a months time of just getting new pants. He's a true boy with that.

I played with an apple logo for our name. Our name Apel is actually pronounced A-Pull - not Apple. I often call Apples Apels in our house. I wanted something from before to be a part of our branding. I had to move away from Planet of the Apels because that already exists. I didn't know that it existed before I came up with that. Travis said, "Don't put our name in an apple!" I didn't.

Despite Isaak's dirty fingers, and the pixelating images from my computer, the most stressful part was getting a domain name. I kept thinking, What if I buy my name, and then can't get it to work? Of course I kept getting an error when I tried uploading my new domain on blogger. BUT...I found out that error was common place. It's what I was supposed to get. Imagine that. Things can never be easy.

Why stay on blogger? I know wordpress is the shebang of the blogging world. I had a few reasons I didn't switch:


The social media buttons on the top were fun, but tedious to make. Do I make the icons teal, or white? What icons do I include? I use more than I wanted up there. Decisions!

Things are fairly consistent. I did have to go through and resize all my buttons for my facebook page. They have to be a certain size in there. It's done. YAY!

I love the new look! Congratulations on rebranding. Have a great week.

I love it.
Great job

I like the new look,and I see you dumped the picket fences fro you site,Oh well.no more votes for you!

I love the new look! It really is a lot of work, but so worth it when you get everything updated and are pleased with the final results!

I LOVE the new look. l liked the old one, too, but sometimes a fresh look is good :)

Your new layout is awesome! I'm amazed you did this all by yourself. Great job! :) And your merged photo looks wonderful, too. I wasn't able to tell you merged it with another photo :)
Anything around blogging is so much work - and so much fun, too :) And I'm always learning something new whenever I want to change something ;)
Have a wonderful day!
Lots of hugs to you,
Beate

I think the whole theme turned out wonderfully, including the picture. I'm not one who's interested in going to WordPress either. I'm familiar with Blogger and don't want to potentially mess up a good thing.

I really love the new look indeed. That new header is awesome. Your boys are great indeed Alissa. And congrats for the new domain :)

Your blog turned out GREAT!! I probably should do something with mine, but won't.

My mother's maiden name was Apel. However she pronounced it with a long A. My great-grandparents on my paternal grandfather's side immigrated from Germany.

Fabsits - We're probably related somehow. My husband's family is from Germany, and they ended up in MO. just like your family did.