A 6th grade girl has a crush on Mica, who is in 4th grade.

He came home one day and said, "Mom something strange happened at school today."

He said, "A 6th grader invited me over to eat lunch."

He said, "Ya...but it was odd because I remember when I was in 2nd grade she stole money out of my teacher's jar."

A few days later Mica told me this same girl has been giving him small toys.

I said, "Let me see them. Did you ask her where she got them?" 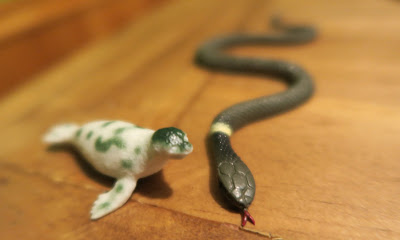 He said, "She didn't steal them Mom. At least she said she didn't. I think her giving me toys is a little much! I'm really glad she's going to middle school next year. People are starting to say things."

I asked, "What do you say when people say things about her liking you?"

He said, "I just ignore them. I run off and play. Usually it's during recess."

It sounds like he has a good head on his shoulders.

I was going to say something to his teacher when I was up there to read to the class on April Fool's Day. Things were hectic. I'll say something if it gets out of hand.

Do you remember your first crush? I liked this kid Matt that had heart problems. He was so little. I felt bad for him because he had to stay in for recess. I talked to him a lot because we were in a special help group for kids that struggled with academics. I would have never had the guts to tell him I liked him, nor would I give him small toys.
Posted by An Apel a Day at 2:56 PM

Hmm yeah I'd probably say something if it got out of hand like she started harassing him or forcing him to spend time with her but if it's a little puppy love, I think it's ok to just let the kids handle it. Might be quite embarrassing to get the teachers involved!

As long as she isn't being too pushy, I'd let it run its course. He might get embarrassed if the teachers have to get involved. Who knows, this time next week, she might have her sights set on a different boy. You know how kids are with their crushes at that age lol

An older woman, lol. My son is in 2nd grade and his best friend is a 4th grader. There's a lot of difference between just those two grades in maturity levels. Your son must be mature for his age (or she just thinks he's super cute, which he is, for sure). :)

Wow, the 6th graders in in the same school as the little kids out there? Here, the 6th - 8th graders go to middle school.

ooh so sweeet :)....
First crush will always be unforgettable..