I don't know what the deal is, but this year has been an emotional one for Isaak AKA Zeek.

He had the whole marker incident happen at school. Where punk kids took the markers we donated removed the caps and stomped on them. He was pretty upset about that. So much so that he had to go talk to the councilor. For the record that was the first time in history he was sent to talk to the councilor. It wasn't because he was violent; just upset.

Then he forgot his homework one night last week. He cried hard for an hour thinking that he was going to get in trouble. He didn't get in trouble. I told him that we all make mistakes. It's not something he does regularly. I've left my laptop at home when I had to teach. Travis has left his wallet at home when he went out. It happens.

He's been having problems with one so called friend. I blogged about this problem already. I keep thinking that he and this kid will just get over their problems someday. I don't even care if this kid is someone he wants to stop liking. We don't have to like everyone. It's just that this kid is in his circle of friends. I fear that if Isaak continues to hold a grudge he'll be the one that's left out of that circle. So far this hasn't happened yet.

Back story: The kid laughed when Isaak fell way back in August. Isaak fell hard, and can't shake that this kid laughed at him when he was hurt. He never apologized. To make matters worse the kid kept telling Isaak, "I only need two friends, and you're not one of them."

Isaak is not one that forgets easily. Things come up that happened a year ago - like they were yesterday.

Their teacher decided to have them not talk for 2 or 3 days, and then see how things went. Those days have come and gone. The little boy came up to Isaak at the Fall Festival on Friday to say, "Isaak have you seen so and so?" Isaak shrugged his shoulders. He refused to talk to him.

Isaak said, "Or I can just continue to not talk to him."

I said, "Isaak you don't have to be best friends with him. Don't go out of your way to talk to him, but don't be rude when he comes to talk to you."

Isaak said, "Or I can just continue to not talk to him. He's mean to me." 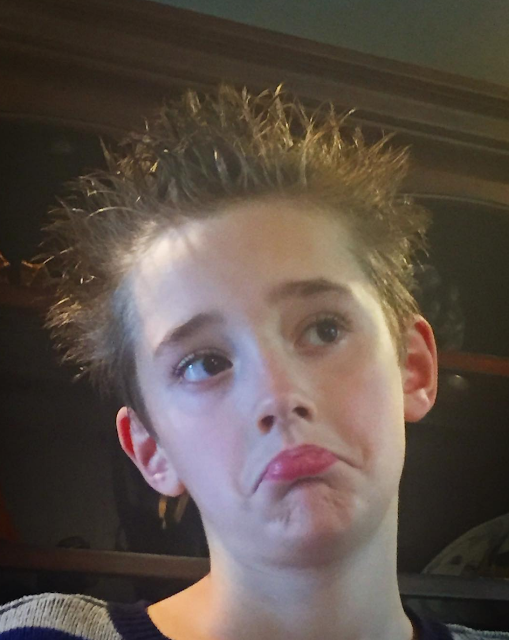 I said, "Yes his actions were rude. Maybe he doesn't know how to act when someone falls. I think it's funny when I fall. I'm not sure why I do. Sometimes I laugh when I feel like crying just because my emotions are all mixed up."

Later on that night I found out the kid's parents are having problems. I didn't bring this up to Isaak. I don't want rumors to start at school. Another friend's grandparent told me that. His Mom has leaned on her to watch him many times over the last month.

I let Isaak think about what I said.

The next day I had another talk with Isaak. I told him about a story from when I was little:

One day I was over at my best friend's house. All the sudden she got a call from neighbor friends to go swimming with them. She wanted to go. Her sister told her it was rude. She didn't care. I left very sad.

The next day she called me up to see if I could play. I said, "No you're not my friend anymore."

I wish I knew how we made up. I think she apologized, and all was forgiven.

Do you ever think that maybe things happen in the past on purpose just so you can pass those stories along for the future?

Maybe my friend is telling her kid a story about something I did to her to teach him a lesson.

Isaak said, "I know where you're going with this... I'm not going to be best friends with so and so." He's good with connecting the dots.

I said, "I don't expect you to be best friends with him." The point is... is that the friend of mine that went to the swimming pool over hanging out with me made a mistake. We all make mistakes. If you ask her, she'll have stories about me. Things that I did that made her feel bad. She's still my friend today." I showed him pictures on facebook. I told him, "Even you have hung out with my friend's son."

I said, "Sometimes it's not about forgiving. It can be. Often times it's about being the bigger, better person by letting negative things go. Just know that people make mistakes." As I said that I was thinking about adults that don't deal with negative people at all, and write them out of their lives. I get that too. I just know kids make more mistakes hopefully than adults do.

Conferences are this week. We may get some things solved there. Even the councilor is usually there. I may talk with her about this friend conflict.

Isaak's always had a plethora amount of empathy. When I told him I had to go into work one evening he wanted to know why. I told him that my boss's mom had passed away. How I had to cover for him. He nearly started to cry.

To think one of my co-workers raised 5 boys and 2 girls. He told me, "Alissa you're going to love having boys. They let stuff go; when girls do not. There isn't drama with boys." Boy was he wrong about boys letting things go, and not having drama. He was right about something, I love my boys.
Posted by An Apel a Day at 3:48 PM

We had a big incident on the bus this year with one of our boys. It was about the political candidates in the election. Imagine that!

One of the reasons we started home schooling was that my son was so unhappy at school when he was your boys age. I took him out school and started him on martial arts and dirt bikes, and it worked out well. He learned more than he would have, did not have to put up with bullies, and was out of an environment where you were not allowed to defend yourself. I feel for you, honest to God. I remember how my wife and I felt when he was having all that trouble and was unhappy.

I'm like Isaak and I don't let go of things easily. Allison is totally opposite and will forgive and forget every trespass that comes upon her. It drives me insane. I wish we could both just meet in the middle sometimes. I do hope "Zeek" has a better week this week!

Broxton has a bully situation at school. We are dealing with it now. Childhood is rough

I'm not sure it was a great idea to have the two friends not talk for a few days. I mean what is that teaching them? That they should ignore one another? I mean Issak's response at the end of the experiment is exactly what I would expect "why should I talk to him now?"

Maybe the two aren't meant to be friends. Maybe this is even the wrong circle of friends for Issak to begin with. Or maybe the counselor can help? Have you and Issak tried to schedule play dates with the other friends? Maybe the focus shouldn't be on the one friend in particular and instead be on the other people who do consider him a friend and are nice to him.

Then again, as always, I'm not a parent/counselor/teacher, so all I can do is spout ideas. Hopefully someone comes up with something that works, and Issak is able to find peace at school and among friends (whether new or old). :-/

Mandy, I don't know what the write answers are for this. Isaak does have other really good friends in the class. He does well in school. The whole incident with this one kid was getting out of hand. I guess they were saying things in class. It was the teacher's idea to have them not talk to one another. It was in hopes that they would get over it, and be civil. I just didn't want Isaak to be kicked to the curb with the other friends in the group. The other 2 are really nice, and they play well. It's just that those 2 like the one that Isaak's having problems with. Drama for boys can be just as bad as drama for girls I guess. If it gets worse they will go talk to the councilor.

Sounds complicated. Like I said, I hope between all involved (teachers, parents, etc…) that everything works itself out. I know you don't want to be dealing with this mess for the rest of the school year. :-/