On Wednesday Isaak woke up feeling sick to his stomach. He looked white! Whiter than his caucasian skin.

Travis stayed home with him because I taught that day. Then he was bouncing off the walls after a 15 minute rest. Travis took him to school at 11 or so. Travis said said to me, "I think Isaak was playing you."

Isaak has never played sick. In fact both boys enjoy school. They don't like to miss because that messes up their perfect record for attendance.

After basketball practice that night Isaak cried in the shower because his stomach hurt again. That's really very unlike him.

I sent him to bed.

That night sucked! Isaak wet the bed because he was sick. Mica doesn't even try to go to the bathroom when he has to throw up. It went all over himself, and his bedding! I said, "Mica you're almost 12! Just try to hit the toilet!"

I decided that they were both staying home on Thursday. It was so back and forth up until that point. All of Thursday they were fine! Too fine to stay home. I had no idea they were going to be like that.


A bucket they never used. 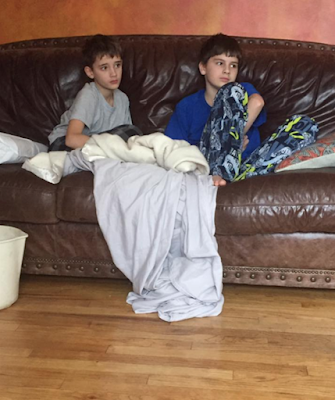 Most of that day I did laundry. A full made bed. I figured I should take a picture, since it's rarely made this nice. The boys got Yellow Submarine bedding for Christmas. 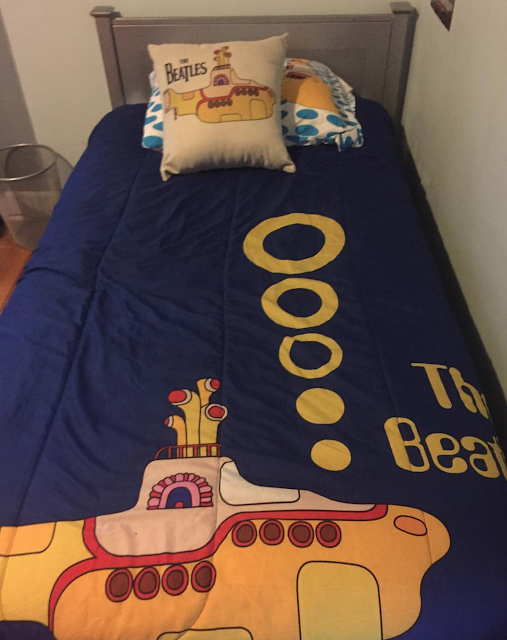 I also helped Mica study his Spelling Bee words. I'll be happy when his Spelling Bee is over. It's February 9th. Mica thinks more like Travis, and Isaak thinks more like me. Helping Mica study is like helping some other kid that's not mine. Many of the words I have to look up to see if I'm saying them right. Mica spells great, but I start to think...what's the point to learn these words that no one uses? There are lists from 2nd grade to 8th grade. He has to study them all. Anyhow he has most of them down. He at least has a chance to win.

I did make the boys stick with the BRAT diet: Bananas, Rice, Applesauce and Toast. I always add JELLO and probiotics to the mix. Beyond that they were happy, energetic kids.

We had a silly moment with eyeliner to make bad eyebrows and a few mustaches. 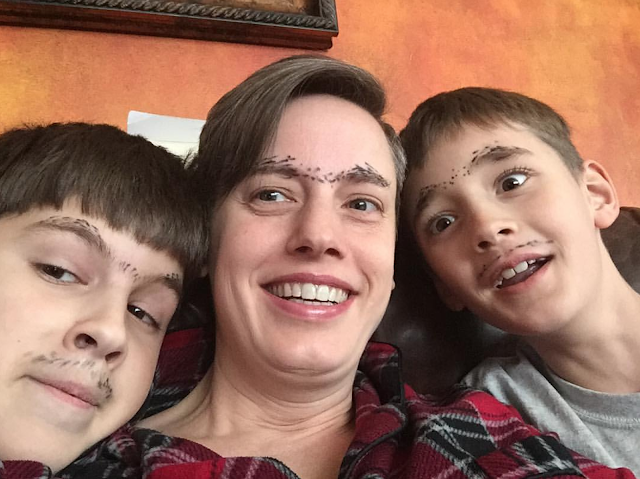 Then the day was done.

Whenever I've gotten the stomach flu it's a 24 hour thing.

Travis and I never got whatever the boys had. Yay!

My girls do that too. As soon as I call the school to excuse the absence, they automatically feel better. Mariah used to hover over the toilet to puke instead of putting her face close and it would splash ALL OVER the bathroom. I think she did that all the way until she was 13 or 14! It was so gross. I always spend all day doing laundry when they don't feel well too. Thankfully, we usually only get it for 24 hours also. Glad everyone is feeling better now.

You surely have tons of fun with those eyeliners :). Hope Isaak is feeling much better now.

The end of the year was rough for us, sick wise.
Lucky we have been good so far for 2017, except I have a cold that refuses to go away.
You guys are funny :)