After Mica's adventure of the Spelling Bee his teacher came up to us and said, "Well Mica you may not of won this, but you have Read to Succeed to look forward too." I sort of knew what Read to Succeed was about. I know that Mica could have participated in it last year, but chose not to.

Mica was talking about reading 6 books for it. All he needed to read was 4 books.

He was in a group with 3 other students that also read 4 or 5 books. His group was against 39 other groups. They were asked questions about the books. Their teacher thinks that they got all the questions right. Out of the 40 groups, only 15 received a gold medal. Mica's group was one of those 15.

Their group competes again against the other gold winners in April for a trophy.

I'm proud of him because last year I got on him about not participating in extra things. He let a lot of opportunities pass him by.

This year he joined band, did the Spelling Bee and won at school, Read to Succeed and won a gold medal, Chess and was 1 of 3 that won a gift card to go to a movie, and Student Council. It may sound like a lot. They were all active at different times, so it worked out. He's happy, successful, and had fun. I'm not all about pushing him if I didn't think he could handle it. He's the type that could easily get bored in school. Very much the opposite to how I was in school. I had to work for my grades! Even then I struggled a lot.


Here's his Read to Succeed Medal: 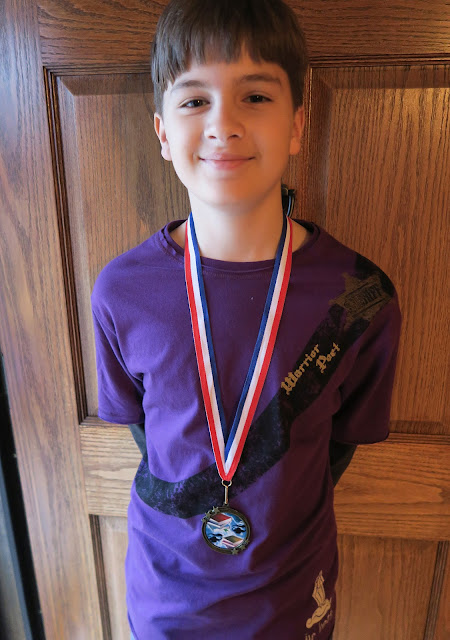 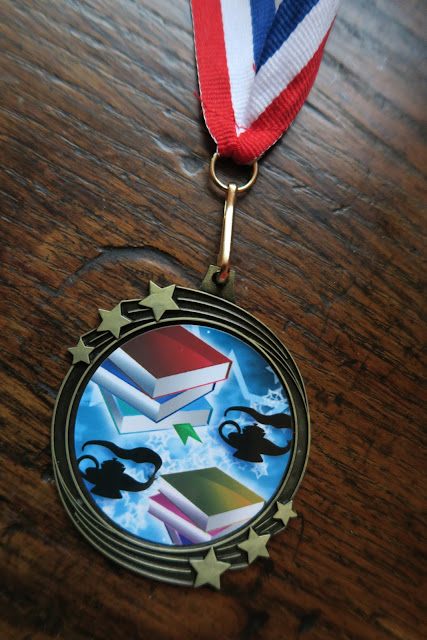 Have you ever been a bookworm?
Posted by An Apel a Day at 3:30 PM

A big congrats to Mica, I bet he is pleased he participated, nice photo too heheh! :-)

Reading often and well makes all the difference in school. Congrats!

Congrats to you and your son on his medal and more importantly reading! When one reads, they always 'have a friend' and will learn beyond learning ~ thanks,

Mica is juggling a lot this school year. Seems like he is handling it well. What kind of books does he like to read? History, maybe?

That is fantastic! Glad he is excelling in so many things this year! Allison will be joining Battle of the Books this spring. I think it's probably the same thing, just a different name.

Always so good to see kids enjoying reading and being rewarded!

Wow! Mica is doing awesome this year! I was like Mica was last year in school - not really participating in anything extra. I think the encouragement to participate and all of the "wins" he's had will only help to improve his confidence and make him a better adult in the future!

That's awesome. I've never heard of that program. How cool. You know I love books!