When I first went to the Allergy Asthma Clinic I wasn't sure what my doctor would be like.

Meet Doctor Ebrahim Shakir
Travis and the boys went with to my first appointment. Travis laughed when Doctor Shakir stepped out of the room and I said, "He's cute!"

We're just comfortable in our relationship to know that there are other good looking people out there.

Travis went to get his hair cut. He said, "Do you ever find certain people so good looking it's hard to talk to them?"

I said, "Ya it's funny when that happens."

He said, "There was this 20 something girl who cut my hair. She was hot. I felt so silly because she was 20 something. I had trouble getting my words out. It's not like I liked her. It's just that she was good looking." I giggled. Then he said, "I wanted to ask for an old school hair cut - rockabilly style." Apparently that's a thing."

Rockabilly Hair Style Example:
He went on to say, "Instead of rockabilly coming out of my mouth I said, 'I'd like a redneck style haircut."

OMG I was rolling on the floor laughing. I'm still laughing typing this.

I asked, "What did she say?" He said, "She just smirked. I think she was trying not to laugh."

I'm not sure he totally got the haircut he wanted. It sort of looked similar to the example above. It certainly looks more rockabilly, than it does redneck. More giggles!

I said, "Well don't be too embarrassed. You'll more than likely never see her again. I have to see my doctor whenever I go in. The last time he looked at my necklace and said, 'That's really cool!' I was just like, 'Thank you!'" Blush!

Sitting in the Allergy Asthma Clinic waiting the 30 minutes after my 3 injections. This is the necklace I was referring too: 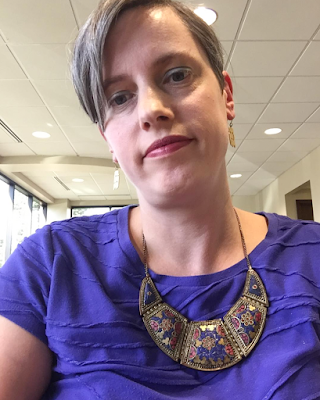 I went on to say, "He holds my hands, says he's going to take care of me, and that I'm a special patient. He wants medical student's to see my case to study me." Even though medical student seeing me would be creepy according to some people I just was like, "Bring them in. I have a ton of family members in the medical field. I understand they need to learn." Blush! I know he's only saying that I'm only a special case to him only because I have allergies, asthma, I'm allergic to Aspirin, I have a really bad deviated septum, and really bad polyps. But a girl can think she's special for other reasons. Ha! Only being silly. I love my husband.

Then I said, "When we're all done Doctor Shakir said, 'I have to rely on you to take your meds. You've done so well with them. I don't want you to get worse again. I want to get you better. Then with further aggressive treatment I'll do my best to get you off all this!'" I was thinking, I'll do whatever you want Doctor. Even if it costs me a fortune!

Then it was Travis' turn to laugh at me.

I think this is one of those stories that's way more funny told in person. I told the ladies at work, and we were laughing so hard.

Have you ever have a crush on someone whether it be a doctor, a teacher, an actor, or anyone else?
Posted by An Apel a Day at 10:04 PM

I had a crush on John Travolta for years. Vinnie Barbarino and Grease... now I look back and laugh. I always liked the bad boy persona, though I am guessing in real life it would not be so appealing. I much prefer consistency and stability... but he was def. cute. ;)

I'm glad things are moving forward for you with the doctor (professionally speaking only, of course, hahahaha). :) He is cute. Travis is cuter. :)

I heard Johnny Depp was at Disneyland yesterday doing a special on the Pirates ride. I probably would have asked him to marry me right in front of Jason if we would have been there lol.

That hillbilly hair cut is too freakin' funny. I bet she couldn't wait to tell her friends about it after her shift was over ;)

You guys are so cute... and funny.
As for crushed, I don't know who I would say off the top of my head. Lol

I LOVE your relationship with your husband and that he told you that he told the lady that was going to cut his hair that he wanted a "redneck" cut. lol. Definitely laughed at that. I'm not even sure what a redneck cut is, and I'm sure I've seen plenty given where I live. *sigh*

I do feel for you having to deal with your cute doctor for months on end.

I've never had to deal with that, but I have had to deal with extraordinarily tall cousins and a tall online friend I only recently met in person. I'm 5'1-5'2" and these people are like 6'+. Needless to say, I feel like a toddler around them. And with them all being males, ugh… They have no choice but to "talk down to me" and I feel it. It's like "yes sir! Whatever you want sir! I promise I'll be good sir!" *sigh* Unfortunately, nobody makes 10-inch heels. Of course, I should be clear. It's not like these guys are trying to talk down to me – it really is just an issue of my being short and them being so tall.