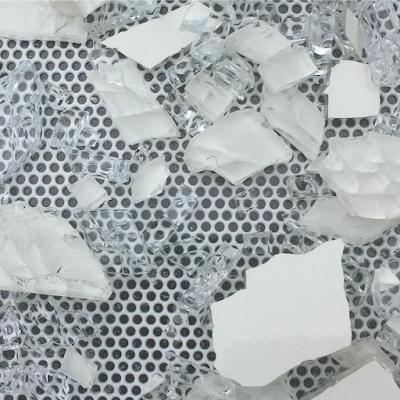 In case you can't tell what that is, it is broken glass.

Friday I left work early, as I do many Fridays during the summer. I take 1/2 hour lunches throughout the week to get out of here at 2:30. I thought it would be great to do this especially this year. Why? Because then I can get my allergy shots in on Fridays. I'll get home at a decent time.

I had Travis drop the boys off to me, as he had to leave to go to his art studio. We drove 20 min. to the allergy clinic. When I told them I needed my card to get my shots in they looked at me like I was crazy. They said, "We don't have shots on Fridays. We never have. We're open on Saturday though." It was almost like they said it like, You should know better. I said, "Really? That's too bad." I just started them. I assumed they were open with shots whenever they were open. Heck they are open late with them on Mondays - they stop giving them at 6:30. I was thinking, No one flipping told me this! Flip! I was planning on this for the whole summer! The boys were annoyed that I drove them all that way for nothing. It was hot, and they are always hungry - even though they just had a snack.

A few other things happened that day. I missed my exit going to the allergy clinic because I was focused on driving, and Mica talking. Kids talking = distractions. I almost got in a wreck. That one wasn't totally my fault. Dodge Expressway is nuts! Everyone was going way too fast. The boys were crazy annoying in a store I needed to go to. They weren't crying, or yelling. They were just being boys. I was in an all girl shop, so it didn't work out that well.

Saturday I had a panic attack. Not really. I just freaked out thinking, What if my school's graduation is at a different location this year? I also couldn't remember if I was supposed to be there at 9 or 9:30. I showed up at 8:30, but didn't need to be there until 9:30. Because they told me 9:30 I can't get paid for being there at 8:30. Annoying! Yes it's my fault for not paying attention.

Today I had yet another freak out. I looked at the calendar, and it said I had my pre-op on the 14th. Well I remember reading somewhere that I HAD to have my pre-op 2 weeks prior to my deviated septum/polyp surgery. My surgery is on the 23rd. I called the office right away. The person that schedules appointments said, "7 to 10 days is fine. You're good." Let's hope they are right! It's bad enough that I have to pay for my surgery before I have it! Yep you read that right. Asshats! My deductible isn't cheap! Hell I'm worried I'm going to me one of those American's left without insurance next year! Ekkk! I'm still waiting for America to be great again! I really don't think that's going to happen. Sigh! Let's beat you, while you're down. What happened to paying things off little by little? In the letter they made it sound like a cosmetic surgery. As if that sounds great to the insurance company. I asked about that one. They said all surgeries like this are worded that way. I held my middle finger up to the phone. I said, "My doctor said I needed this surgery. If I didn't have it polyps would eat away at the bone by my brain, and I will die. It's not a choice surgery." I maybe appealing the insurance company on this one.

I'm not usually this much on edge. Travis started his residency. I've been playing single Mom all weekend. With my surgery coming up I haven't been sleeping well, and feel like I have a mountain of things to do.

Hang in there! We all have moments like this where it seems that everything is going wrong. My insurance keeps calling me wanting me to discuss how I can live a healthier life. They are pissed they have to pay for my injections every 2 months at $5,000 each. I'm like are you f'ing kidding me on living a healthier life? I eat healthy, I exercise, I take my probiotics and vitamins daily. I'm one of the unfortunate ones that happened to get an incurable autoimmune disorder from NO fault of my own. There isn't a single thing I could change in my lifestyle that would make it go away, as much as I wish there was. They can take their "healthier options" they think I should be doing and shove them where the sun don't shine!

Oh Theresa I feel for you! I know other people that have autoimmune disorders, and they are healthy too!

I need to loose weight, but it was hard for awhile because I couldn't breathe with asthma. Had I known that I had polyps I would have gotten this taken care of awhile ago. Now I'm on steriods that really don't help with loosing weight either.

Hugs my friend, just think of the end result. I'm so happy you're getting this done.

I do, Alissa...oh my! The stress level of my work is pretty high but my kids and hubby are my neutralizer, so to speak :). hanging there , dear! I know you will pass all these in flying colors. I

Sending positive thoughts your way. Sounds like a rough day. :( I can't believe the doctor worded the surgery as if it was cosmetic. :( Hopefully, the appeal to your insurance company will cover more of the total cost. Also hoping orange dude doesn't get AHCA passed. And that he becomes a peach. :-/