No pictures of my nose as of yet. For 1 they wouldn't let me take anything back with me. My phone had to stay with Travis. For 2 I'm starting to swell up, and don't look the best. I should have taken a picture this morning; it didn't look so swollen then.

My nose is straight now. My nostrils aren't the same, but that's not why I had surgery. Most importantly I can see just fine, and I don't have meningitis. The surgery took about 2 1/2 hours. I guess my septum was really crooked back there. My polyps were bad.

It was an outpatient surgery. I got there at 10:30, had surgery pretty much on time 12:35 or so, and stayed until about 8:30. They were hesitant to let me go because I couldn't go to the bathroom a lot. Did you know under anesthesia that your bladder is the last thing to wake up? I made up for it last night. I drank so much in the hospital to try and go. Ha!

My nose is more sore today than yesterday. The really good drugs have worn off. Travis went to pick up my meds: Antibiotic, Nasal Spray, and Pain Meds. He quickly found out that the pain meds needed a written script. Well the hospital didn't have it on file, and it's Saturday. So I called the doctor on call. He delivered a script to the ER for Travis to pick up. That was a pain, but I'm thankful I got it.

Three things that annoyed me in the hospital: 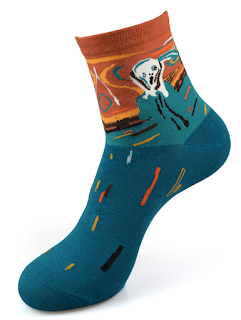 The saline spray helps my nose from getting dried out. It also makes me bleed constantly just a little bit.

The boys spent the night at my sisters last night. They looked at me this morning and said, "Well you don't look that bad." Then when I put the gauze under my nose Isaak said, "That's weird."

I'll be off work for 2 weeks. It's supposed to take a few months to recover.
Posted by An Apel a Day at 4:43 PM

I'm glad you've come through it okay, I also have thin and rolling veins which cause problems from time to time. Little cups of sorbet sound so good, dang. I adore your socks but you have to watch out for those blood clots. Either that or you'd have to wear the bumpy bottom dealies.

Glad your surgery went well and that you were able to get your pain meds. I think the boys' reactions were hilarious! "You don't look that bad!" lol.

So, how does this "few months to recover" work. Are you off in July and August + 2 weeks? Or?

I hope you get to feeling better quickly and that you make a fast recovery. Maybe when you get out of the hospital, you can gorge yourself on sorbet. :)

I'm just off 2 weeks of work. Really at work during this time of year I just sit at my desk, and work away anyhow. If I teach a summer class I give the student everything they need, and check in on them from time to time. It's not like teaching during the school year.

Glad it went according to plan! Yes, they make you wear those hospital socks instead of your own. I think I have about 500 pairs here from all the visits Jason and I have made to surgeries this past year. Jason did say the saline spray really helped. DO NOT use the netti pot though. He did and it actually slowed down his recovery time.

I know I'm suppose to use the neti pot after the splints are out. I was going to talk to the doctor about that one.

Glad to hear the surgery went well and that you got those pain meds. Wishing you a speedy recovery! Take care!

Just here to check in and see how everything went. I'm glad you posted an update and happy to hear always a success!

Gosh, it sounds like it was more traumatic than I thought. I'm sure sorry you had to go through all that. I hope you get back to 100% really soon.

I haven't had to deal with surgery since I broke my Achilles tendon in a karate class 20 years ago. I can still remember how horrible it was. Get well really soon.

Hope you are on track. Please post soon to let us know how you're coming along.

my veins are thin too so sometimes I've to get needled a lot just for one injection or something.. bleh. Thank goodness I'm not scared of needles haha.. I love your socks!

Hanging there! You'll go through this in no time..I was wondering whether that compression shock work.