A few weeks ago our boys started back up at their leadership camp. It's Saturday nights.

They usually have Tiers that go all throughout the year, but have breaks between them. Within the Tier they have what they call Capitols, which include: Financial Capitol, Social Capitol, Culture Capitol and so on. They do different things in each one.

All this month they have field trips to different places. It's 5:30 to about 10:45. Saturday nights the boys are up pretty late!

Their first field trip was to Alley V, which I've reviewed before. It's a place with all kinds of fun things:

Isaak came back with all this loot: 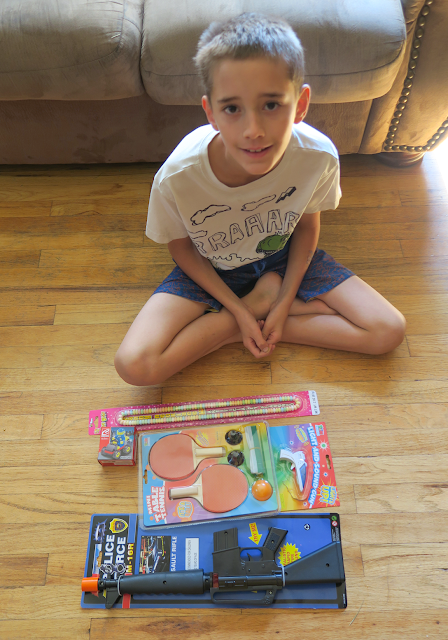 I guess Isaak was rolling in the tickets.

If I was there I would have helped Isaak pick out things.
I'm pretty sure Isaak got the most loot out of anyone.

Last weekend the boys went to The Amazing Pizza Machine.
Mica said, "Mom they have a buffet there. The first time I went up I got salad, pizza, and some healthy things. The second time I went up I loaded my plate with sweet treats!"

Isaak said, "Mica you got pizza?! I couldn't find that!"

Mica said, "Isaak you just have to read. There was a big sign that said, 'Pizza'. It's called, The Amazing Pizza Machine."

Then Travis said, "They mentioned that Mica needs to work on talking with the other kids his age. Mica tell Mom why you don't talk to the kids your age."

Mica said, "Well all they talk about is sports and fidget spinners. I don't get into sports, or know anything about them. Fidget spinners are ok, but they just spin around. I don't get why people like those so much."

I emailed the leader of the nonprofit to explain that Mica isn't stuck up, or shy. He's just not into sports or fidget spinners. But...my email was 3 paragraphs long. I felt the need to explain how I've been in his shoes before. I'm the only artist girl in a family that has 7 nurses. When they talk I can't relate. They have so many abbreviations for medical things. If I started talking about color theory to them they wouldn't understand all of what I was saying either.

Mica's smart enough to know that he's going to sound like an idiot if he starts to talk about sports, which he knows nothing about.

My advice to him was to change the subject in between conversation, and/or ask why they like sports so much, or what teams they like and why. You can not get into something, but still have a conversation about it. I do get how he feels though.

Mica's a movie buff, loves to read, is into Legos and Star Wars. He likes school, and doesn't think of it as a drag. He's a nerd with a funny personality.

Travis said to me, "You really don't have to write him a book to get the message across."

I had to shorten what I wrote. I tend to over write. I just want people to understand where I'm coming from.

Yesterday the leader for the camp wrote back explaining how much of an asset Mica is to the camp. When they have Capitols Mica really shows how smart he is, which pushes the others to bump themselves up. He was glad I wrote him.

I had mentioned if he had any more advice on Mica relating to the other kids to just let Mica know.

Have you ever been in a situation where a bunch of people relate to one another, and you're the odd man out? How did you deal with it at the time?
Posted by An Apel a Day at 11:57 AM

Mariah has a hard time fitting in too because she never liked makeup, celebrities, television or anything that girls her age were obsessing about. Thankfully, she's already made some friends in college that finally share her interests. It's hard being the odd man out!

Sometimes I do feel that way with the mums in Lil Pumpkin's class too.. most of them are SAHMs and it's like their whole lives revolve the kids, which isn't bad, of course.. but I don't know.. I don't like to talk about "mumsy" stuff all the time and we don't seem to have other similar interests