About four years back we won a DVD: The Cosby Show. It was a combo of their best episodes.

Mica said, "You know we're just like the people in the Cosby Show." It made me giggle. Mainly because he wasn't even seeing the fact that our skin shades and tints are different.

It's great that Mica sees past the color of one's skin.

For the record I think Mica is a combo of Theo and Vanessa. I think what he was referring to at the time was the fact that they are a funny family, which we can be funny too. 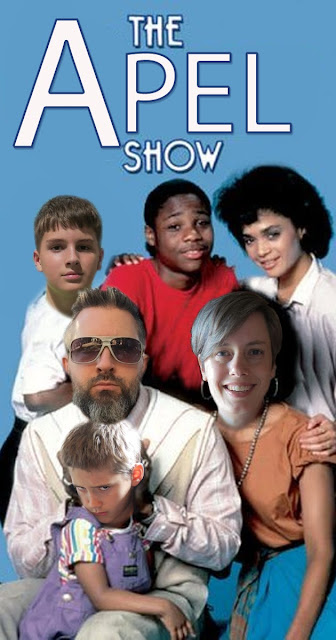 Well then Bill Cosby got accused of many things. For awhile I didn't even want to watch the show. I decided that there's more characters than just Bill Cosby in it.

The Cosby Show is on Amazon Prime right now. I do have to say that I'm not the type of person to ban things just because I don't agree with someone, someone's actions, something said, or something done.

The boys enjoy The Cosby Show.

Do you ban shows, shopping places, or listening to music based on something that has happened with an actor, owner, spokes person, or singer in real life?
Posted by An Apel a Day at 8:51 AM

I used to love the Cosby show... Marc was never a fan.

The Show is great..but what happened to the actors/actress is something else :). I still enjoy watching their series though..

I miss wholesome tv like The Cosby Show. No, I don't ban a brand because of one person's actions. However, if one person is their brand that's a different story. Like, when Miley Cyrus was flashing her lady bits all over the place, but was still marketing her Hannah Montana stuff to kids. Look, you wanna flash your junk all over? Fine. But pull the kid stuff from the shelves and take the financial loss. I refused to buy my girls her stuff once she wanted to act all grown up.