Camp Aim for the Stars

I have to go backwards a bit. A few weeks ago the boys went to Aim for the Stars | Science and Math Camp at University of Nebraska Omaha.

I like that the camp is so parent friendly. What I mean by that is, is that they have a before and after care program, they have a self pick-up for kids that have been to the camp for more than a year - you just drive up to pick your kid(s) up and they get in, their registration is simple and online, you can pay for all of the camp or installments, and the family event is in the evening.

They've been going to this camp for years now. What I like is that they offer different camps within the camp. Examples: Isaak was in Stack it Up! and Mica was in Get Your Game On! The year before the camp names and content was different for the boys.

Family Night was the night before we went on vacation. There are options, so we do things different each year. You can go into the classrooms to check things out. There's also a choice of going into the planetarium for a slightly cheesy movie, or C.A.P.O.W. - Chemistry and Physics on Wheels. C.A.P.O.W. almost seems like a magic show, but it's science. They have their gift shop open. For the camp the kids get a $5 off coupon for anything in the gift shop. We always have gotten something small for the boys there.

Here's their camp t-shirts they got this year: 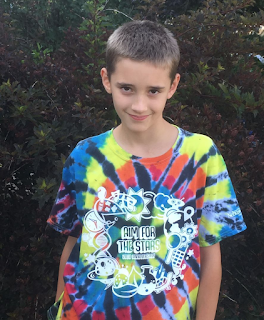 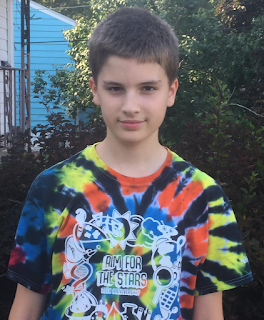 We actually opted to skip the big fancy presentations, and spent our time in the boy's classrooms this year.

Isaak was so excited to be in Stack it Up! with his cousin Elijah. They built a city with Legos. Isaak had a theater. He had a container where he was collecting fake tickets from people. 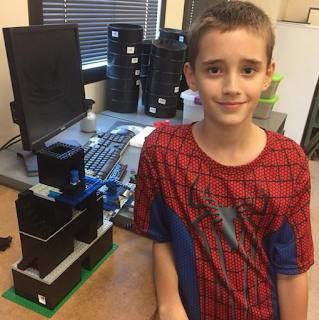 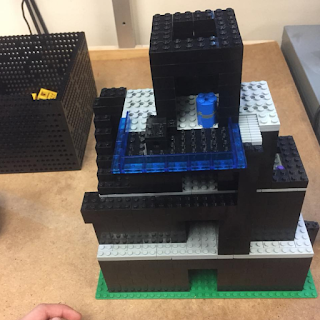 Isaak was really happy that Mr. Miller was his teacher for the camp. He has worked at the elementary school when Mica still went there. He has a boy that's Mica's age and a girl that's Isaak's age. We've had their other oldest child babysit a long while back. We've hung out with them at different times.

Besides stacking things up with Legos, they also played Jenga and were supposed to have a paper airplane contest, but it rained all day so that got canned.

Mica wouldn't shut up about Get Your Game On! He was a little bummed that his cousin Evan wasn't with his. My sister Terra signed him up for a different camp.

Mica's never really gotten into bored games as much as Isaak or I. With his birthday coming up he has been going on and on about games he wants. A few are $45 games! Yikes! He's talked about all these survival games: Risk, Pandemic, Settlers of Catan, and Stratego.

I bought Risk on vacation to keep them occupied at Travis' Aunt and Uncle's house.

I got Settlers of Catan on Amazon with a GC I won.

I've contacted Z-Man in hopes that they'd give me Pandemic to review. I even laid out what kind of a post I'd like it to be. Where I'd go over board games for older kids, and ways they benefit them. I haven't heard back, so I'm betting that's a no go. I kind of wish they'd just email me saying, "Nope", so I'd know to just buy it. I thought with reviewing for ThinkFun, Goliath Games and Tenzi they'd be all over that. My life feels a bit full of rejection these days. Oh well. 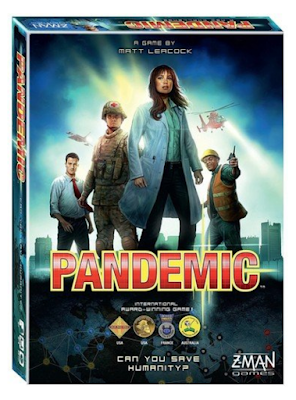 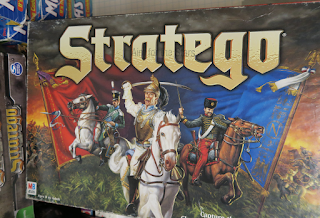 Mica even taught me Othello; saying it would now be my favorite game. It was good he was thinking of me. I did like it. 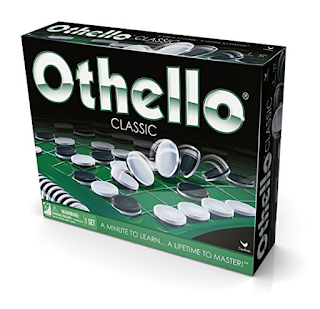 We spent most of our time in the game room battling it out. 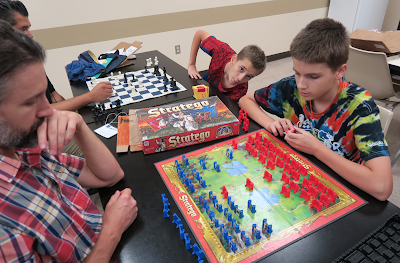 Isaak got a bit bummed the teacher kicked his butt in Chess. Ha! 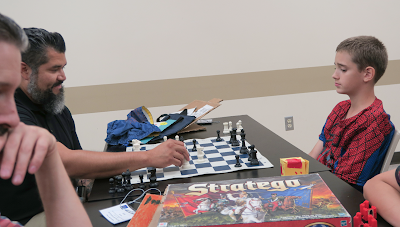 What board games do you like the most? Are there any that you've played that we should try out?

Disclaimer: None of these products were given to me to review. I'm only sharing an experience.
Posted by An Apel a Day at 10:27 AM

We haven't played board games since Mariah has been home from college. she's usually working late or over at her boyfriend's house. When we do play, we love Apples To Apples and Scattergories. We like the dice game LCR. I like Clue, but it's a struggle getting everyone to want to play with me. Allison's favorite game is Payday.