We stayed home for Easter, which is where we belong right now. 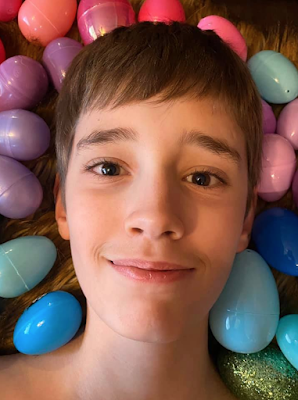 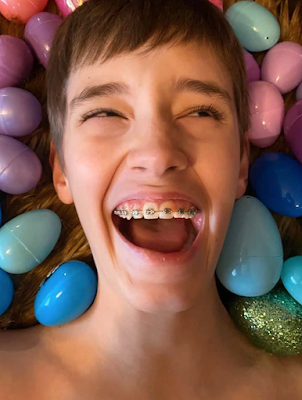 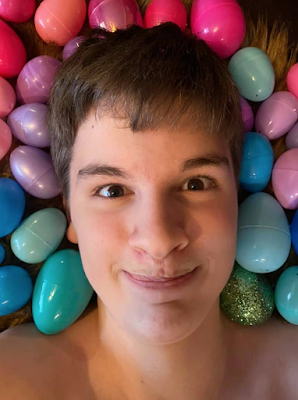 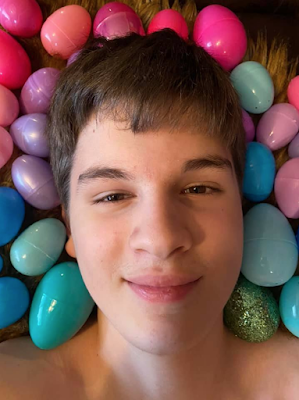 My parents were nice, and brought cinnamon rolls over yesterday. They literally set them on our steps, texted Travis to come grab them. I didn't have to make the coffee cake I planned to make.

I did a scavenger hunt, despite Travis feeling done with such nonsense. I think as long as the boys enjoy things like that, I'll do it. Usually it's Mica that struggles with the clues. This year it was Isaak that struggled with them. The first was, "5 blue eggs are hidden where a spin cycle happens." Isaak's like, "A spin cycle?! I don't know what that is." Mica's like, "The washer has a spin cycle Isaak." I was vague with some clues on purpose. The last one ended with a pun, "You'll have to weight for your last clue." All the remainder eggs were hidden by the weights.

Truth be told I got 3 different types of M&Ms after Valentine's Day. At the time I felt cheap, now I feel it was really practical.


We spent the majority of the day watching Stranger Things 3. We don't have Netflix, and that's one show we love. I got it around Valentine's Day, for them to get it for Easter.

After we were all done watching Stranger Things 3, we had a quick make shift lunch/dinner. 1/2 a baked potato with cheese, fried ham, and a dollop of plain Greek Yogurt, green beans out of a can because I was out of fresh ones, Travis made a dip with chips. Poof the quickest meal made ever.

We had a zoom meeting with my sisters and parents at 7.

That was Easter. What did you do for Easter? Who did you spend the day with?

Just me and the boy this year. We watched a sermon on TV. Read from the Bible together. Ate a special dinner and I hid eggs around the house. I hid a $10 in the golden egg to make up for us not being able to have a traditional Easter. I know a lot of families load their kids' eggs up with money but I usually don't, so he was surprised and excited. It was different, but still nice.

I like that you put clues with your eggs. I agree with you, if they enjoy it, let 'em do it. Kids don't stay kids long. :) I'm glad you had a Happy Easter.

I think it's great you still do scavenger hunts with the boys. Allison is 16 but still enjoys those traditions like Elf on the Shelf and looking for a paper 4 leaf clover at St. Patrick's Day to earn a pot of gold (chocolate coins) once she finds it.

We ended up not making any dinner but filled all of our plastic eggs and went and threw them in the yards of our friends and Jason's co-workers for their kids to find. We called ahead of time and the kids were able to watch the bunny from their windows act like a fool hopping around their yards for a little bit. It was out little way to bring some cheer to an otherwise depressing Easter.

@mail4rosey - I kind of wish I didn't start loading the kids up so much. Then they wouldn't expect it every year.

@Theresa Mahoney - I think that's great that you brought things to your neighbors. I bet it was fun. You are right, less depressing for everyone during a depressing time.