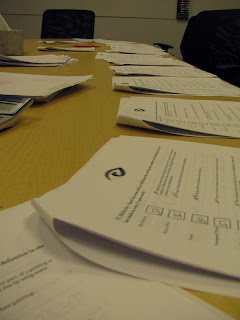 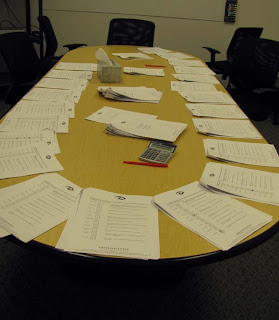 I used to grade exams singularly. Now I try and get as many as I can on a big table and grade a whole bunch at once. I really can't wait until this week is over with! I have to start all over again with grading tomorrow. This is only 1/2 of them.

Plus I had to grade speeches, notecards and artwork. I know that grading with a red pen is supposed to be bad now a days. I heard that it sends negative signals to students. My students don't get their tests back, so they don't see the red pen that stands out like a sore thumb.

Next semester I'll be able to test over the local network via MacBook Pros. Thank you Steve Jobs!!! We love Macs in the graphic field! You will be missed!

Apple and McDonalds were the first logos Mica and Isaak could point out. Cousin Evan used to sit in his pack n' play, point at my computer and say, "Apple." Daddy thought Evan wanted an apple to eat. It took a few times of him repeating, "Apple" and pointing before he finally got it. Time sure does fly! Evan is now 6!

So much work, being a teacher is very difficult. And May Steve Jobs rest in peace...

good god :( and how easily we think teaching is easy...

Oh Uggggg..... Tests! As a student, I always thoght the teachers liked giving us tests. Little did I know!

That graphic is so cool.