Cousin Emerson (nephew to me) has surgery tomorrow. He's getting the hardware taken out from his jaw surgery he had a few months ago. That will take a few hours. Then he's getting his adenoids taken out. Thankfully this time he will not have to go on a ventilator. He will be sedated for a few hours.

I'm hoping that when his adenoids come out that he will not get sick as often. I wonder if some of his stuffy nose issues are part teething? It's possible. Babies with Trisomy 18 tend to get sick more often then babies with no chromosome problems. The doctor that is taking his adenoids out really wants that done. His are enlarged.

Here's a picture Aunt Terra (sister to me) took of Emerson: 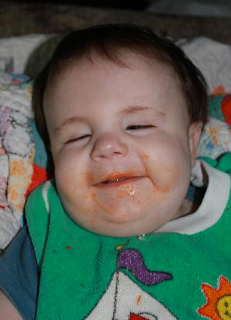 Little guy loves to eat. It does take awhile. He goes through one 1 little jar every 2 days. He opens his mouth like he wants food. He likes veggies and cereal best. Fruit is not on his list of loves. Terra thinks it's because he has acid reflex.

He loves getting back rubs and head rubs. I was rubbing his head last night and he looks like he was enjoying it. He even shot me a few smiles. Then when I stopped he glared at me.

He smiles and will stand up with help.

We'll be taking care of cousin Elijah (nephew to me) during Emerson's surgery. Cousin Evan has a play date and a sports event.

Hang in there little Emerson!

He is adorable! How old is he now?

Yes, hang in there, darling Emerson!

Give him a big hug for me. I wanna pinch those cheeks!!!

OH my word, he glared at you? Too cute! I wish him an easy surgery and wonderful results!

How precious he is. I can't believe how much he has grown! As usual, many thoughts and prayers!!!

Emerson is getting so big!!!!!!!!
prayers for an easy surgery.. and strength to you and your family during it..

The benefits of talking to a doctor early on in an illness are well-proven, with those who seek the professional care of a doctor having faster recovery times. This means that a person suffering an illness can avoid extra days missed at work, and get back on their feet quickly.
Talk to Doctor