Most days are. Some more than others. Today was a good full day. The boys were so good! Last week I was complaining that they were so crazy.

It started out with swimming lessons at the Y. While one kid has his lessons, I read to the other one. With Mica I read him one book and he reads me another. With Isaak I read two books. I really wish they'd get their family bathroom working again! The shower is broken! :( Having two boys, that room is so nice!

Then we went to to the bank and off to Kohl's. I bought Isaak a few Tony Hawk shirts. He's getting pictures taken tomorrow. Just him this time. He'll be 4 on the 19th. I won't post his picture until closer to his birthday. I know Tony Hawk is more expensive. I sure do LOVE their shirts! At least they were on sale and I have 20% off on top of that! Mica kept asking why I wasn't buying him ANYTHING. I said, "Mica I buy for you WAY MORE then your brother! He hardly gets anything new because he gets all of your clothes."

Then we went to Bed Bath and Beyond. I got a set of glass storage containers with snap on lids. I'm getting kind of sick of the BPA stuff, not knowing what plastic containers are BPA free and which ones are not. I put my containers in the microwave a lot because I work full-time. We rarely go out to eat during lunch, while at work. Yes glass is heavy to carry around, but at least it's better for us.

Then we went home. We ate lunch. Then hooked up the slip n' slide for some true fun! 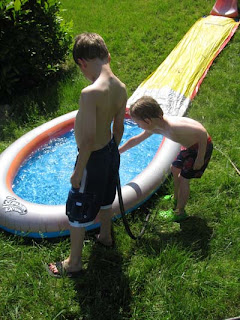 It's funny how water is going down the slide, waters in the pool and they still have the desire to fill up buckets to splash each other with water as they go down. 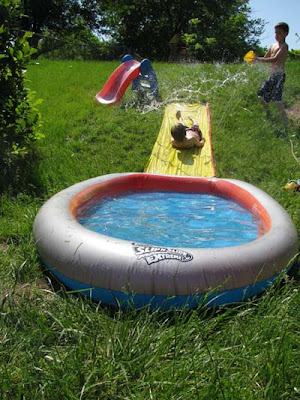 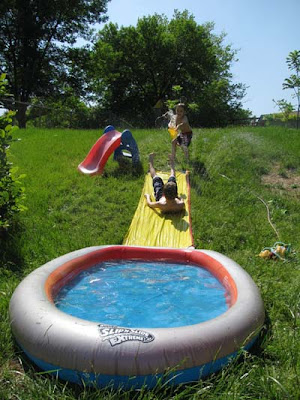 They had fun slipping and sliding. I think that plastic slide at the top is for 2 and 3 year olds. My boys still use it to extend the slip n' slide experience more. I have to hold it to make sure it doesn't slide right down the hill. Pictures are harder to take, while I'm up there holding the slide. 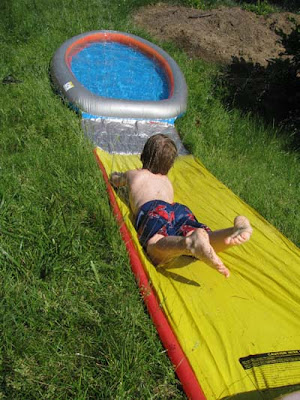 Then we went to get gas and grocery shopping.

I think when they say not to go to the grocery store when you are hungry is right. I bought way more then what I needed.

Then I went home and made two dinners. I don't every make two dinners. Daddy and I wanted chicken enchiladas. The boys always say, "It's too spicy!" I took part of the chicken and put it into our enchiladas and the other part to make the boys chicken alfredo. I made our dish with greek yogurt and lemon juice instead of sour cream. Shhh...don't tell Daddy. He said he liked it, but has told me in the past that he can tell the difference.

Mica was gobbling up EVERYTHING last week. Today he wanted so little to eat. It's Isaak that's gobbling up EVERYTHING today! There's always one child growth spurting. One of my co-workers that has 5 boys told me that boys are expensive to eat. I'm thinking he's right. At least my boys will eat veggies as a snack. They ask for surgery things to. Some kids will not touch veggies. Mica and Isaak like them.

Since I make two meals there were lots of dishes to do. Now I'm debating if I should unload the dishwasher, or save that for the AM hours.
Posted by An Apel a Day at 10:14 PM

I bet with 2 boys and your Hubs, you go through a lot of food. It seems boys, and men eat so much more than girls and women. The old saying must be right..... They have hollow legs.

That looks like a lot of fun. Slipping and sliding down the hill to land in a pool of water. I wouldn't mind doing that myself.

i know how you feel feeding them... just think, during the summer, i have 4 boys and my husband... wow!
i wish we could have a slip n slide, i know broxton would love it