The other day we had Cousin Elijah over. The Y was having a smoothie party. I decided I'd take the boys over to make smoothies.

Elijah is only 2 months older then Isaak. They play really well together. That's when they are alone! When Mica or Cousin Evan (both age 6) get in the picture, Isaak's immediately the odd boy out. :(

Elijah thinks he's one of the big kids. He throws a ball and bats a ball better then Mica can. Cousin Evan has always included his brother in everything. Mica doesn't always include Isaak.

For a long time Mica and Evan called Isaak "A Baby." Mica wouldn't eat Cherrios because they were, "Baby Food." When in fact it was Isaak that liked them for a snack. It's taken awhile to break the older boys from the, "Baby" thing! Isaak really just acts his age.

Elijah and Mica ran to the Y, while Isaak walked with me. Elijah and Mica played tag at the Y, while I bounced a basket ball with Isaak. Finally it happened; Elijah decided to sit with Isaak in circle time, while Mica sat with me. :) I'm not saying I want Mica to be left out. It's just that Isaak seems to be the one that's the odd boy out most the time. It makes me sad for him.

Mica raised his hand after the instructor started talking. He had his hand up for two to three minutes. She called on him. Mica said, "I didn't know if anyone noticed that that little boy over there (he pointed to Elijah) is new. He's my cousin Elijah. He's here to have fun. His little brother, my other cousin is in the hospital. He had surgery today." It was pretty sweet of Mica to introduce his cousin and make him feel welcomed. We went downstairs to make different samples of smoothies. Elijah got to help with the blender. We all got samples. I didn't get any good pictures of Isaak. I really wasn't trying to leave him out! ;) 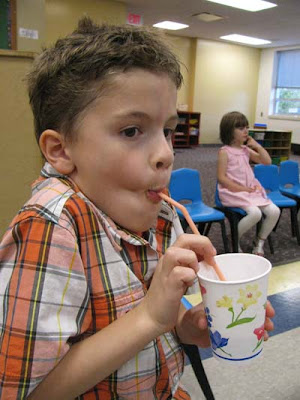 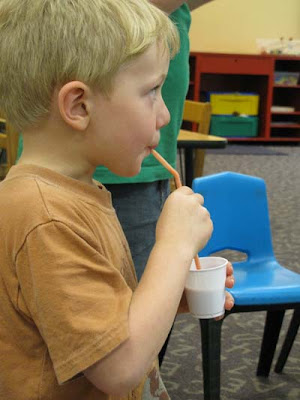 After the smoothie party we walked home. I then took Elijah to the hospital. He got to see his mom, dad, Evan and Emerson. 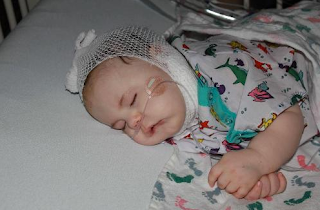 Emerson looked like the above picture that Aunt Terra took. He was sleeping most of the time that I was there. The net hat was just there to hold on his dressing. He did so good and got to home sooner than we thought he would! He went home yesterday! His adenoids were so big that they were blocking his airway in his nose. I'm pretty sure that when the swelling goes down that he'll be able to breathe a lot better than before!

it is so great that yall are so active at the Y... and also, you know i love emerson updates :)