A Bum Told Him to Stop his Whining

I have to say that the boys were VERY GOOD on our vacation.

It took nearly 11 hours to get to Chicago on train. A lady got sick, so we waited for a paramedic to come and pick her up; that took some time. We also got up at 3 AM to get to the station.

Then the boys got thrown from their schedules. No naps for Isaak. Bedtime was as late as 10 pm a few nights! That just doesn't happen at home. The only night they stay up like that is on the 4th of July.

We did a lot of walking!

At the Chicago Art Institute Mica was pretty into the art. He got to walk around and type in numbers to listen to stories about the artwork he was seeing. That lasted about two pieces for Isaak. Then he was grumpy.


Isaak with his pout face. 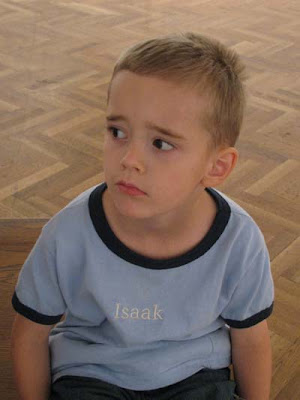 Isaak was big into climbing on things when we were walking on the sidewalks in Chicago. We kept telling him,

At one point he was jumping over sidewalk cracks like boys do. I said, "Isaak you need to stay with Mommy! You are going to fall, then cry because you got hurt. Walk with me. No one wants to hear a kid that is not theirs fussing!" Truth be told, I didn't want to hear my own kid fussing!

Two seconds later a bum in the street looked right at Isaak and said, "Hey kid stop your whining! I don't want to hear it! No one does!"

I don't know if the man in the streets had heard what I had talked to Isaak about. I wanted to start laughing!

Isaak shut up immediately! Less then 2 minutes later Isaak looked up at me and said, "Mommy I don't like what that guy said to me!"

I'm sorry but that is just too funny! Wonder why they listen to other people and not their own parents? LOL

I love it! I have actually taken people aside and asked them to talk to my kid, including a policeman haha it always works

How funny that a bum told him to quit whining. He had to of heard you say something.... and if not, maybe it bothers him listening to that. I guess none of us like to listen to it.

i still can not figure out why they listen to others better than their parents... ha ha

Oh my gosh poor Isaak but I bet thats going to be told and retold during family gatherings :)