Daddy took the day off yesterday to go on a field trip to the pumpkin patch for Isaak's preschool. Isaak's in 2 preschools this year. I have a feeling we're in for a lot of field trips.

I wished they'd just charge us extra every month instead of forking up exact change. I wouldn't even care if I ended up paying more in the long run. Use it on school supplies for the next year.

With Mica we just told him, "Honey we won't be able to go on all the field trips." He was fine with that. All he cared about was going someplace special. Someone made it to most of them. I tried telling Isaak this and he was terrified. Daddy took the time to go. Then Isaak woke up yesterday and said, "I want everyone to go." I said, "Honey just be thankful that Daddy is able to go with you."

They had fun. It wore him out.

Isaak wanted to wear his "Davy Crockett hat". It looks like there is snow on the ground, but there is not. 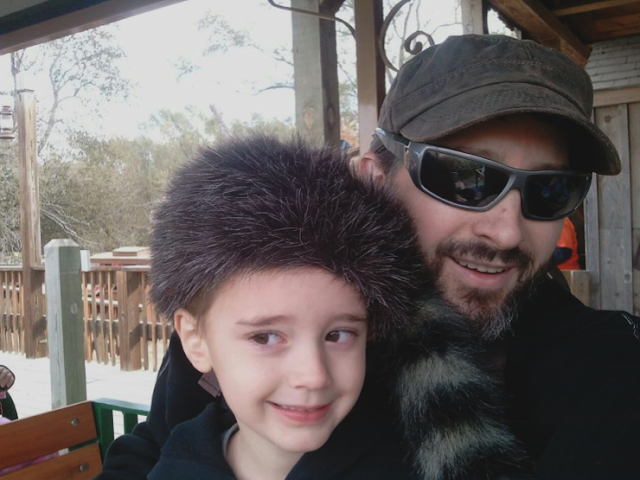 They took a train, they picked out a pumpkin, apple cider, and brownies. The one thing they had trouble with was the trampoline. Isaak didn't want to jump on it with other kids jumping on it. Then when all the kids got off, Isaak wanted to jump on it. He's still in a funky stage. I'm hoping he moves on and becomes better about group playing.

Mica said, "I'm worried about Isaak going to Kindergarten next year." Daddy asked, "Why?" Mica said, "Because he's so worried and scared when he doesn't know people."

Signing him up for an additional preschool is good because he is forced to be around kids he doesn't know including his cousin that he knows well. He loved school last year and kept asking to go. Then there's that part of me that wonders if I made a horrible mistake with signing him up for another school because I'm making him feel insecure by being around kids he didn't know. Maybe he wasn't ready for that. He'll need to be for Kindergarten next year though. Parenthood decisions suck sometimes!
Posted by An Apel a Day at 4:00 PM

i think it was a good thing to sign him up... he needs to learn to be around other kids, as he will not always know everyone... starting now (in small doses is better than just throwing him in it down the road)

It does look like there is snow on the ground and like they are dressed for it.

Sounds like a fun day for Isaak. Bet Daddy was happy when it was over.

I think it was good to put him in too, especially if his cousin he knows well is in there too, that's got to help.

Parent decisions can be trifling sometimes, but we usually end up doing the right thing by instinct, I think. :)

I don't think you need to worry about Isaak. Not everyone likes group activities. As he grows up he may actually have a better sense of who he is than his peers who only know who they are in a group. Just saying. ;)