First off if you didn't check out my fruit turkey post, you have to. Yes I'm in a bossy mood. HA HA Not really. I just think they turned out cute.

I've been to two art schools and worked at one. One thing I know is that Halloween is important to a lot of art students. So important that when they are all dressed up they pay little attention to working on school work all day long. I too get a little restless. I guess I can't blame them.

I work with a few lame butts coworkers that don't dress up. Really I like them most of the time. When most everyone is dressed up and having fun; the ones that don't dress up really stand out. I should back up and say that not all non dresser upers are lame. It's just that if you worked in a place where Halloween was prize worthy and everyone got into it, have fun, dress up. It doesn't have to be a scary and evil costume; like my husband thinks it needs to be. It can just be fun.

For the record I'm lame when it comes to football season. Almost everyone talks about it and I could give a rats butt. I'm not perfect either. I don't join in on that party.

Here's what I was: 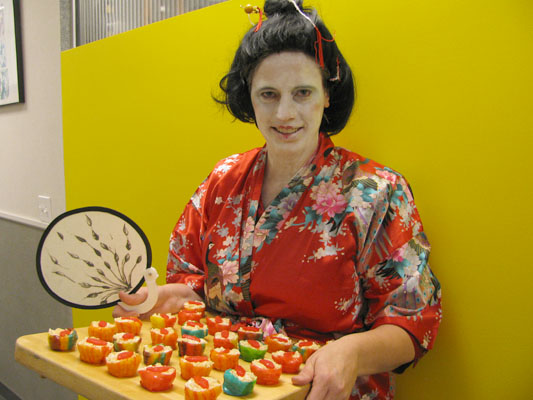 There's my FANtastic fan. I made lots of Candy Sushi! Two rows in a 9x12 glass dish and that cutting board was filled to. from 9:30 to 11 it was all gone! My college students were hungry! Their moms and dads don't give them enough care packages evidently. The cutting board my uncle made. Cool right?! I just word a red shirt, black pants, red flip flops, bought an Asian robe and an Asian wig. It beat the close to $100 costume I saw online. I wish I could have spent a lot longer on my make-up. It was much harder than I thought! I won first place for faculty regardless. 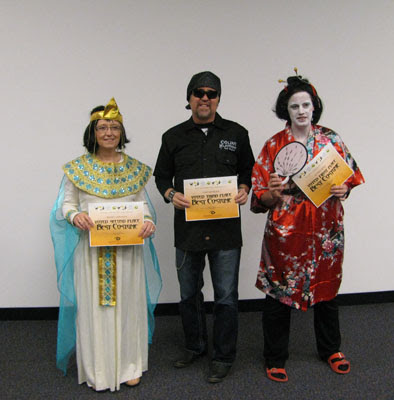 I liked this simple costume of Mr. Clean. He works with me. It worked. 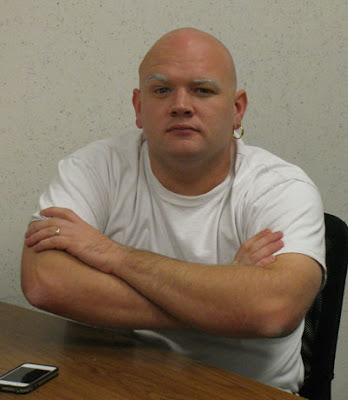 Here are some of the students dressed up like loofah's. I love homemade or self put together costumes! 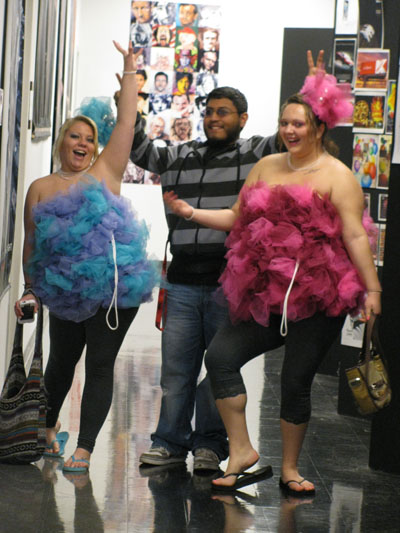 It's hard to tell, but this girl made her costume! It looked like a mascot. It had a lot of detail and it squeaked. 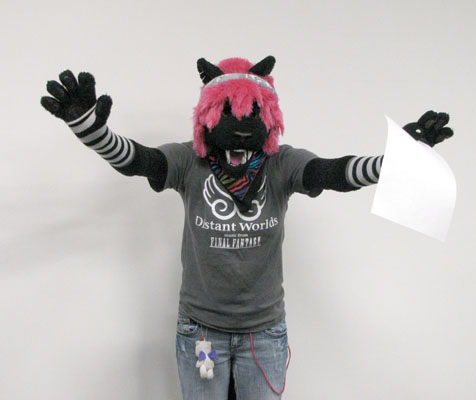 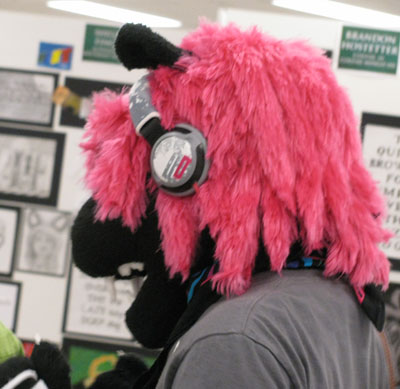 This guy rocked. He's a green plastic army guy. He even made a stand! I just wish he painted his neck green. 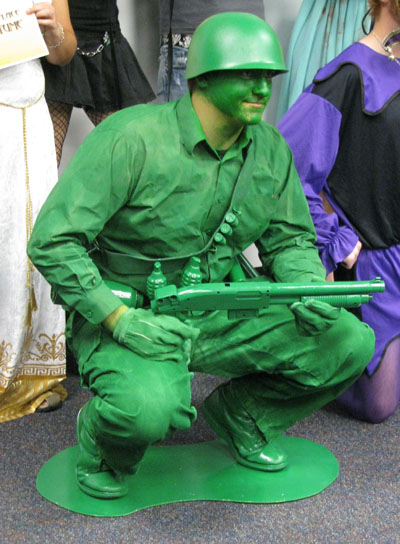 Here's a group shot of student winners. A girl that was Medusa, she had fake plastic snakes in her hair. She's the one with green hair. That guy in the purpleish mask was a Joker. He bought the mask in New Orleans. The guy in the pink skirt was a tooth fairy; it said so on his shirt. There is an Opera Singer in the back. The guy with the box on his head is himself. It's a cartoon version of himself. There's Pebbles and Bam Bam in there. Well there's more. 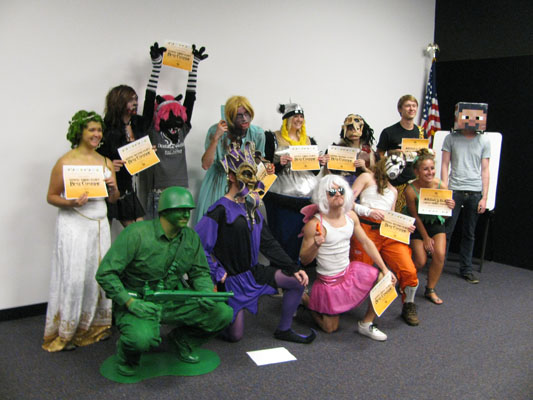 Little school work was done that day! We had fun regardless. I got way over stimulated. When I got home to hyper kids that couldn't wait to go trick or treating I felt done in. I was happy to stay in and hand out candy. Daddy took the boys out and about.
Posted by An Apel a Day at 9:45 PM

What is with that unpainted neck???

You look mahvelous and candy sushi sounds like a real winner.

Hahaha - the army guy and Mr. Clean are awesome. Your costume came out great and what a good idea about the candy sushi. Very creative.

I really like the idea of Candy Sushi and your outfit! The candy looks delicious. My daughter is an art major and she loves Halloween also, I guess it is the creative part of her! She is so busy this year with her art work that unfortunately she did not have time to go to any parties. Hopefully next year!
twinkle at optonline dot net

Also the green plastic army guy had a great idea with that costume!

that army guy is awesome... and Broxton loved it too