The latest tornado attack makes my heart melt. I just feel for everyone involved. This morning I saw this picture: 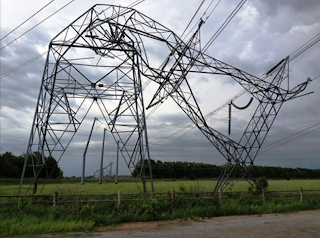 A blogger friend of mine said these things reminded her of Cinderella when she was a child. Cinderella is all broken; along with many people's lives! :(

Here in Omaha we have a double murder investigation going on. Two people were killed in their home recently. In 2008 someone went into a house and killed a little boy and a housekeeper. The connection between the cases is that both the gentleman killed recently and the Dad of the 2008 case worked together. They have a homicide police unit on the cases. It was in separate parts of town. I've had the 2008 case on my mind since 2008. I just could never get the little boy's face out of my mind.

I still think about the Batman shooting, the Sandy Hook shooting, and the Boston bombs. It's just tucked away in my brain and images come up often.

In 2007 we had a local mass shooting that happen here in a local mall at Von Maur. One gun man killed 8, wounded 2 and killed himself.  I was pregnant with Isaak then. My hormones went nuts. I cried for two straight days.

I don't even let my kids watch the news, or any evening TV. It's all too much, or inappropriate for children. I'm not all about hiding things from my kids. I just feel like if we as adults can't understand what crap is going on in the world, how in the heck can we expect kids to get it?

Another minor thing broken - my car. This morning I went to back out of my driveway, I looked, but the truck I hit must of been in my blind spot. BAM! 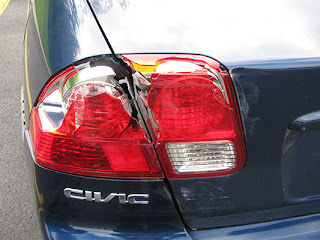 It's oh so minor compared to the rest of the stuff happening in the world. The trunk is scraped, the side panel is popped and the light is broken. No one was hurt. I still feel like a criminal.
Posted by An Apel a Day at 10:04 AM

Email ThisBlogThis!Share to TwitterShare to FacebookShare to Pinterest
Labels: broken

I haven't even been able to turn on the news because the sadness and horror in Oklahoma. I start to cry every time I hear about it, so I've just been tying to sit back until I can handle it a little better. Of course, the Boston marathon thing is still very fresh around here and I still think about the Batman shootings every time I hear the words "the dark knight". There is just so much sadness in the world these days.

It's just so absolutely devastating and it hurts my heart something fierce. :( I'm glad your accident was a minor one, but still...

Allison is always worried about a tornado hitting. As soon as the sirens go off she goes in a panic and starts crying. I haven't let her hear or watch anything about yesterday's tornado. It would surely double her already huge fear of them.

So sorry about your car. Even a minor bang up can ruin your day :(

I'm sorry about your car! Thank goodness it was minor and no one was hurt.

I've seen massive damage after hurricances that still leaves my heart aching. I can only imagine what the victims of the tornado are going through. :(

Oh My!! Cinderells dress is broken and so is your car. I am happy you weren't hurt. Hate when something like that happens.

i know what you mean about your heart hurting... it is so sad...
but on a funny note..
we went to kroger the other day... (right next to the liquor store) and there was a guy out there with the cops.. seemed he backed straight up into the HUGE BRICK sign and busted his whole back window and tail lights out...