Last weekend was so busy I didn't even post everything we did.

Mica had a Jiu-Jitsu Tournament. It was just for fun. No board breaking events.  This was their first event held in Omaha for kids.

Jujitsu is a mix between Judo and wrestling. They do a lot of ground fighting.

I notice that they test very different from Karate. My oldest nephew is in that. In Jiu-Jitsu they get stripes on their belt before they test for a yellow belt. Sensei said it took him 25 years to get his black belt. My nephew is in middle school and has his black belt already. Everyone in Mica's class hasn't even moved up to a yellow belt at all. We get a few yellow belt kids coming in from the other Y to help out every so often.

I was worried because Daddy took the boys swimming the night before. I was out to celebrate Mother's Day with my own Mom and sisters. I came home thinking that the boys would be in bed. NOPE! The house was empty. They didn't get to bed until 9-9:30. That's late for the Apel boys.

Can you tell he was tired? 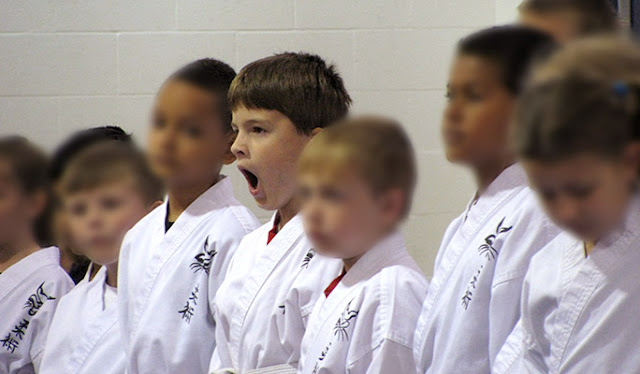 He was signed up for a few events, but had to wait and wait for his event to come up. It took too long. The whole tournament was supposed to last from 9-12, but ended up lasting until 2! Mica was hungry and tired of sitting around. It was their first time for the event. They couldn't exactly call off things that people were signed up and paid for.

Finally he was up: 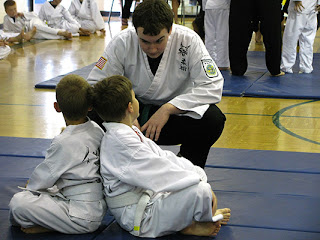 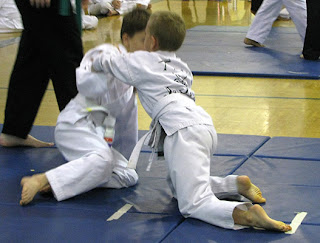 He won his first match. 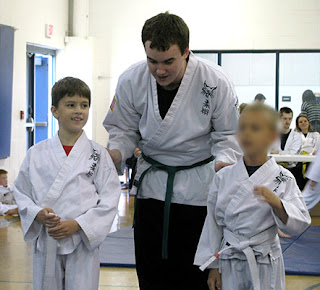 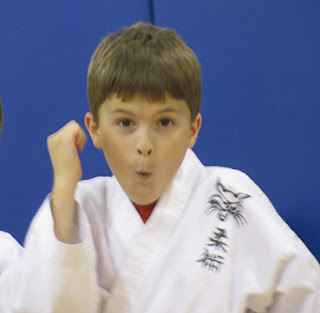 Then the next event came along and Mica wasn't on the list. He was written in with one of the kids that had been in for twice as long as Mica. He was beat right away. Grandpa said it's good to sometimes be stuck with people harder than you, because you learn. No one else got stuck with anyone harder than them. Mica took it well. Daddy on the other hand was a little upset for Mica. *He didn't tell him this. 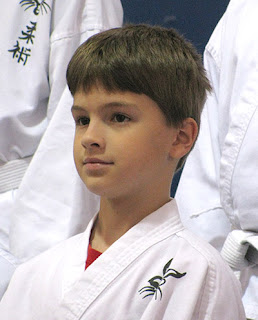 In between all this Isaak drove me nuts. Remember it lasted way longer than it was supposed to. Isaak was wound up. Him and I finally left to go prepare food wise for our Mustashe Bash, and to eat lunch. 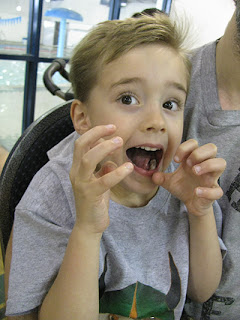 Mica got a medal because everyone in this generation does. I don't say that to be mean. It's just true. 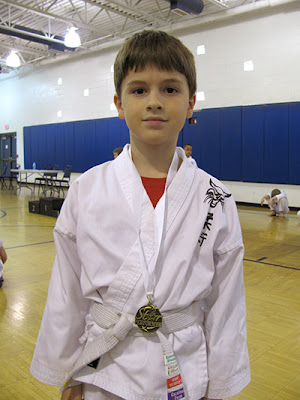 Later on this week at practice Daddy had a talk with one of the other Dads. We've questioned weather Mica should keep doing Jiu-Jitsu, or not. Sometimes he's really serious about it, sometimes not as much. He enjoys it. I like the philosophy of any martial art. The boys seem more serious about swimming though.

Mica doesn't seem to have that fight anger instinct like other kids have. When he's pinned, he doesn't try and get out of it. He just assumes they won. Isaak seems more like the kid you don't want to mess with in our family. The other Dad agreed about his son. Then Sensei stepped in and said, "I've been doing this for a lot of years. It seems like it just clicks with kids after awhile."

That's understandable. With Mica drawing, writing, and cutting didn't click right away. Then when he got it he was just as good as the other kids, if not better than many.

I think as long as he's enjoying it, we'll keep him in it.

We're thinking of starting Isaak up in the fall. We want him to mature a little before he starts. He's capable, but might just want to fight everyone on the planet.
Posted by An Apel a Day at 11:46 AM

My oldest did this for years and loved he. When he was older he did a lot of the lion dancing in the shows too with it, it was fun!

If he had to lose a match, I'm glad it wasn't his first one. That could have set a negative tone to the whole event, so yay for winning that one.

I'd be with you on keeping him in as long as he's enjoying it.

If someone won all the time it could tend to make them pretty cocky so maybe it is good for him to realize HE CAN BE BEAT. That just might make him work all the harder.

we thought about taking broxton to karate. they said it was good for them as it taught them discipline and manners... so i was all about it, but we just can not afford it right now. maybe later

All the kids in my 8 year old's tournament got participation medals. Actually, I think it's the same way in all the sports around here, too. Too bad about that oversight, though.

Congrats on the first win! I sometimes felt that way about Allison not being so interested in her gymnastics. I stuck it out, and eventually she just fell in love with it. I'd give him a little more time. If not, maybe it is best to move on to swimming.