On Saturday I really wanted to take the boys out to do some things. We went to the Lowes Clinic. They were super excited to make planes! 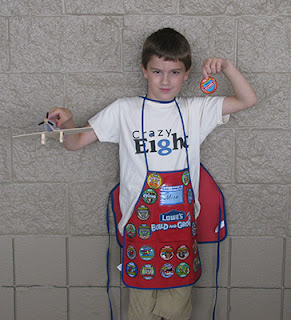 Isaak really was off that day because his tummy hurt and leg hurt. I don't know what the deal was. He was limping. I believe that he really was in pain, but I didn't know what to do to help him. He didn't participate much in building his plane. 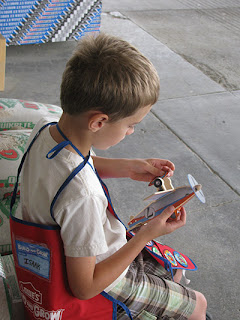 The boys got a new apron because they filled up their aprons two times ago. Instead of wearing just one, they wore one on the front as an apron, and the other on the back as a cape.

After that we went to Barnes and Noble. I had a coupon for Mica (the birthday boy) to get a fee cupcake, or cookies. Isaak wanted something to drink, so we got a Grapefruit Izzy to split. I just love bookstores. I know someday there won't be a bookstore, but I think they are great! We sat around, had our snack, read books and they played with the table train. 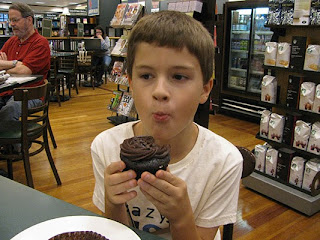 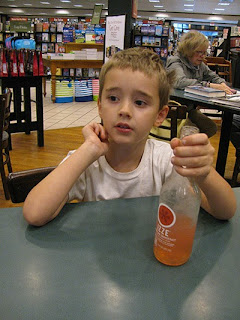 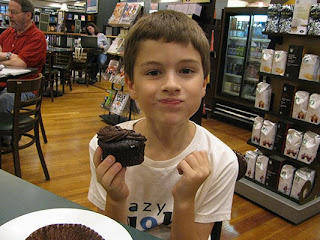 Fun! I love those clinics that Lowe's and Home Depot have!

I hope bookstores never go the way of the dinosaurs, I love them too!

I can't believe they've already filled up an apron! Wow!

I told my Step Daughter about Lowes and she was checking into it. Not sure what she found out.

Cute planes! The cupcake looks delicious! I love bookstores too. I will be sad it/when they disappear. I used to manage one and from time to time, I miss working in one too.

We've been meaning to do a Lowe's Clinic. It really looks interesting and fun! I might have to pull down the packed calendar and compare dates for our Store!

glad yall had a nice saturday.
now that school is getting ready to start, we need a better routine again and I am thinking the clinic might be one to start back up

Looks like they had a good day. I hope bookstores always stay around. There's just something about holding a book, reading it.